Ever see the scene in Office Space where the two Bobs (OD consultants) are trying to figure out what people do at Innotech?  They would have loved to tackle the topic of Title Inflation (Bob #1 – "What would you say your title means here?").

There’s a solid article this week at Knowledge at Wharton focusing on the topic of title inflation in the C-suite, noting that companies have expanded C-Level titles from CEO, COO and CFO to include the less 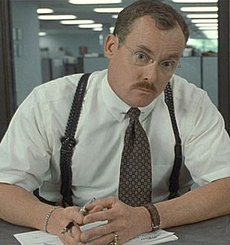 standard CMO (Chief Marketing Officer), CPO (Chief Privacy Officer) and CTO (Chief Talent Officer).  The article correctly points out that a primary reason for the inclusion of more C-level titles is the desire on the part of the organizations in question to show a functional area’s importance and clout in an organization.

Of course, HR Pros know that title inflation has long been an issue underneath the C-suite in companies big and small.  Over the years, it seems like the most pressure in an organization (big and small) from a title perspective revolves around the designations of manager, director and vice-president.  With these titles in mind, here are my top reasons why your managers occasionally want to "beef up" the title of an associate:

1.  Limited funds exist for an aggressive Merit Increase – If the funds aren’t there to be super aggressive on the merit side for a high performer, throwing in a beefier title seems like a good way to reward an employee.

2.  Retention Concerns – A manager may believe that a high performer values title and prestige over money, and thus feels pressured to deliver a paper title to a high performer – although their role won’t change via the promotion.

3.  Customer Clout – A title occasionally is bestowed on a high performer based on the rationalization that employee holds a position that is key in dealing with (often negotiating) with customers.  In this space, the title is rationalized as being helpful in giving the employee the authority he/she needs with customers

4.  Internal Equity – Managers may feel pressure from certain high performers to promote them aggressively in title due to the titles that others in the organization have for their respective roles.  This factor is intensified when the employees feels like they are on uneven ground with the other direct reports of the manager in question.

Left to the chaos of an non-standardized organization (especially with a decentralized HR function), everyone does their own thing (which is to give out titles without much structure or consistency).   Then someone in the org runs a report, and discovers the mailroom services guy is a AVP (Associate Vice President for all you non-title inflators out there).

You know the drill, especially if you have spent time in a larger company.  What follows the AVP of Mailroom Services discovery is a title standardization campaign leaving many (and I mean many) employee relations issues (hard feelings) as titles are stripped away and replaced by more realistic tags describing what the employees actually do (or as close as they can get).

Been through some of that – it’s always much better to provide a little resistance up front and make sure all in the org are on board before handing out inflated titles.  Best place to start?  No manager titles if the person doesn’t manage direct reports, and no Director or VP titles if the person doesn’t manage managers who have direct reports (multiple layers in their organization).

After all, you don’t want the two Bobs asking you about the titles…