OK, here’s the situation.  Gas costs $3 per gallon, companies are under increasing pressure to show their "greenness" and studies show that telecommuting can boost productivity in most, if not all, jobs.

Based on those facts, would you increase the amount of telecommuting, keep it the same, or start making 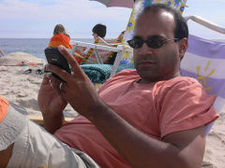 your current crop of telecommuters come back to the office?

Right!  You would increase the amount of telecommuting or at least keep it the same…

Unless you just got acquired and the winner of the merger doesn’t like telecommuting.  From Network World:

"AT&T, a company that once was a poster child for telecommuting, is downsizing its long-running telework program and requiring thousands of employees who work from their homes and other virtual offices to return to traditional AT&T office environments, according to sources.

“It is a serious effort to reel in the telework people,” says Chuck Wilsker, president and CEO of the Telework Coalitions, an organization in Washington, D.C., that promotes telework through education and legislative efforts.

“We have been getting calls and e-mails from very unhappy AT&T teleworking employees who are being told that they will no longer be allowed to telework,” says Wilsker, who has heard that as many as 10,000 or 12,000 full-time teleworkers may be affected.

A spokesman in AT&T’s San Antonio, Texas, headquarters denies there are broad-scale plans to end teleworking arrangements, but acknowledges there may be some isolated cases. “Teleworking is at the discretion of the business,” says Walt Sharp, the spokesman.

He says AT&T is in the process of reconciling the human resources policies of the legacy AT&T, SBC Communications, which acquired AT&T in 2005; BellSouth, which was acquired in late 2006; and the former Cingular wireless operation, previously co-owned by BellSouth and AT&T."

Here’s a primer in the merger.  SBC is the winner, acquiring both the AT&T and BellSouth operations/brands.  While the AT&T brand will be used moving forward, managers from SBC are clearly calling the shots – and from what I read and hear, they don’t like or don’t get the concept of telecommuting.

Living in the Southeast, I have a lot of friends at BellSouth, and they report that there have been long conference calls announcing that if you live in a metro area with BellSouth office space, you’re expected to report to the real estate and your assigned cube/office.   The only way out?  If you have a manager with the chops to get you in under the rug as an exception – and apparently those are few and far between.

What a nightmare – DSL and network providers forcing telecommuting workers back to offices as over-arching policies.

Better firm up the dress code while you are at it.  What happened to the ties?   Is that programmer wearing (gasp..)…. flip flops?

Have you workers no shame?