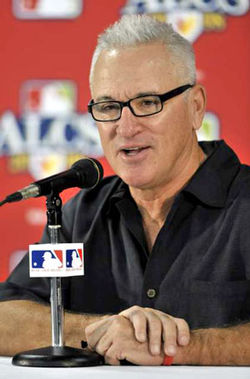 The World Series is here, and it reminds me of the talent/economics lesson that occurs each season in Major League Baseball. This year's compensation lesson? The Tampa Bay Rays, now featured on Fox in their quest to win a championship, have a total payroll this season of $43 million. The Red Sox? $133 million. The Yankees? $209 million. The Phillies (the team facing the Rays in the series?  13th overall in payroll at $98 million.

You might want to think twice before thinking you can buy talent to the top of your industry.

From the New York Times:

"From 1996 through 2003, the Yankees appeared in the World Series six times. But as Matthew Silverman, the president of the Rays, pointed out the other day, much to Selig’s delight, Selig’s vision of revenue sharing and distribution of national network income has helped the Rays, whose current payroll of $43.8 million is the second lowest in the majors.

For all the dire predictions, baseball has somehow produced 15 different pennant winners in the last decade. Think about that. Since expansion in 1998, half the major league teams have appeared in the World Series — and seven teams have won it, and an eighth is guaranteed to win this one.

Always interesting to see the battle of haves and have nots in MLB.  For me, the corporate lesson is pretty simple. We all think it would be nice to have all the resources in the world, and go acquire the best talent at every position.  But the law of diminishing returns is alive and well in the company, as well as on the field.  Talent doesn't always add up as the sum of the parts you put into place.  Chemistry, progressive management skills (see this story on Joe Maddon to believe you can be a nice guy and win) and the development of young talent through career pathing is not only the most affordable way to go, but likely promises the best returns as well.,

As long as you've got a culture that the young talent can identify with and be motivated by.  Now, when are my Royals going to get some of the low payroll, small market MLB love?