You’ve heard the story of Goldilocks and the Three Bears right? Breakin’ it down for you – Goldilocks was a bratty little girl who disobeyed her mom and invaded the home of the Bear family while they were out for a walk. While she was there, she helped herself to their stuff in search of an experience that was “just right”. To bring you up to speed on the story, Goldilocks is all grown up now, and she’s likely interviewing for a position with your company. 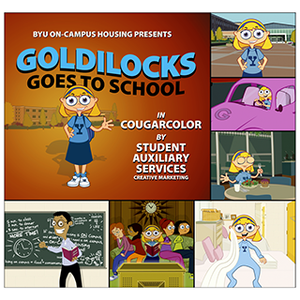 further her career. She created a target list, reached out to her network, and quickly scored an interview for an executive level position with a well-known company in her industry. When she arrived for the first interview, she was left waiting in a busy lobby for almost half an hour before anyone came to greet her. Finally, two newbie recruiters introduced themselves and ushered her into a meeting room with a wall of windows facing a cubicle farm. They grilled her from their list of questions, but were frequently distracted by people walking by who waved at them. Most of their questions, thrown at her in quick succession, started with “Tell me about a time…” and they asked few follow-up questions.

Both recruiters spent much of the interview looking down while taking copious notes, and they were unable to answer most of the questions she posed to them about the opportunity. At the end of the interview, Goldilocks asked about the next step in the process, and was informed that she would be scheduled for some standardized tests before progressing to the next step – which would be an interview with someone from HR. After being pointed in the direction of the lobby, she left the interview with a very poor impression of the company and elected not to continue further in their interview process.

Goldilocks’ background is impressive. She’s a Game Changer – and even with the current economic conditions, she knows that she’ll have a variety of opportunities to choose from in deciding where to continue her career. She’s not in a hurry, and isn’t interested in wasting her time with recruiters or companies who just don’t get it. Maybe the company above would have had a shot at Goldilocks if they had considered the following:

Making a positive first impression. Candidates should be warmly greeted when they first arrive, and taken to an area that is comfortable and inviting if they must wait. Always, always be on time for scheduled interviews and conduct them in a positive environment free from distractions. Value the candidate’s time and make them feel welcome and important!

Creating an interview guide unique to each position. Develop a job specific list of interview questions that will uncover how candidates have performed in similar situations and demonstrate how they approach different types of challenges presented by the position. Mix behavioral interview questions in with skill-based ones, but maintain a conversational flow. Conversations are comfortable and encourage sharing of information. Interrogations are not comfortable and tend to produce canned or short responses from candidates.

Selecting an effective interview team. Pair skilled interviewers with note-takers so one person can focus on asking great questions and following the flow of the conversation – or at least alternate asking questions and note-taking. Interviewers who lose eye contact frequently due to note-taking make it virtually impossible to develop any kind of connection with a candidate.

Including only relevant steps in the interview process. Asking candidates to complete tests or assessments that “everyone must take” or requiring several levels of phone or in-person interviews before talking with the hiring manager is a quick way to turn candidates cold on an opportunity. Just say “No” to asking that CIO candidate to take the typing test you’ve been giving all candidates since the beginning of time. (Unfortunately, I’ve seen that one.)

Providing an opportunity for candidates to meet employees at or above their level early in the process. By-the-book interviews or first interviews with very junior team members point to a hiring process focused on quantity, not quality. In-demand and senior level candidates want to see that others “like them” work at the company, and they want to ask questions/get answers from that perspective as well. They typically don’t respond well to being treated like Applicant # 1,462.

Goldilocks is out wandering in the woods looking to make a job move, and she may just show up at your  house company for some porridge an interview soon. Are you comfortable that she’ll find the experience to be “just right”?

Jennifer McClure is a Vice President at Centennial, Inc.,a Cincinnati-based recruitment and coaching firm, where she’s charged with strategic recruiting efforts, executive coaching and business development for the firm. Send her an uncustomized LinkedIn invite at your own peril…