By now, you've heard that the CEO's of the big three automakers (Ford, GM and Chrysler) each took their own PRIVATE jet to DC to plead for a $25 billion dollar bailout from the federal government.

See the issue?  So does Gary Ackerman (D-N.Y.) who blasted the big three with the following missive: 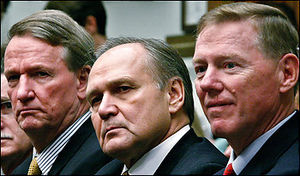 coming off of them with tin cups in their hands," Rep. Gary L. Ackerman (D-N.Y.) advised the pampered executives at a hearing yesterday. "It's almost like seeing a guy show up at the soup kitchen in high-hat and tuxedo. . . . I mean, couldn't you all have downgraded to first class or jet-pooled or something to get here?"

Gary - how do your REALLY feel?  Of course, you're right.  I guess the gloves are pretty much off, based on the economy…

Hey Detroit – isn't that still an expense that hits your bottom line?  That might help you forego a $25-50 billion dollar bailout? A yes/no answer will be fine; spare me the additional rationalizations. Sadly, I haven't even heard any spin from the automakers.

So, the Capitalist likes capitalism but dislikes bad PR in the wake of a bailout.  Big deal. But the private jet drama got me thinking – what are the perks and signals in your workplace that tell your rank and file employees that everyone's not created equal?  I started my own list below and ran a similar article over at the Capitalist, but that was about the AIG spa trips; I couldn't resist using the same theme here.  Hit me in the comments with your additions and check out the comments at the capitalist about AIG here:

-Security for executive level offices, but none for the rest of the company

-Different email storage capacities based on your position

-Top managers always get the new stuff, never allow their direct report to skip them in technology

Like Bush and Good Charlotte said, it's the little things…

What am I missing?  I know there are more, and you're just the person to enlighten me.  Hit me in the comments with your Big Three-like examples of bloated corporate excess you'd love to blow up, as a HR pro responsible for the flock….