Five reasons you shouldn't fire an employee who meets and, sometimes exceeds, expectations?  Sure, I've got those for you.  The rundown:

1. The employee had done some good things in the past and is likely attractive to your competition. 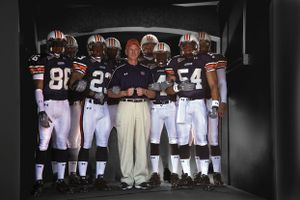 Is the problem you or them?

2. The employee has had a rough stretch.  Giving the performance you've seen in the past, they're capable of getting back to that performance level.  Have you coached for performance?

3. THERE'S NO GUARANTEE THE TALENT YOU RECRUIT WILL PERFORM AT A HIGHER LEVEL THAN THE EMPLOYEE YOU HAVE, and some would say the odds suggest you'll get someone who performs at a lower level, or you'll lose time and money when you train them to that level of proficiency.

4. THERE'S NO GUARANTEE THE TALENT YOU RECRUIT WILL PERFORM AT A HIGHER LEVEL THAN THE EMPLOYEE YOU HAVE.

5. I repeat – THERE'S NO GUARANTEE THE TALENT YOU RECRUIT WILL PERFORM AT A HIGHER LEVEL THAN THE EMPLOYEE YOU HAVE.

What's got me thinking about this?  Simple.  The crazy, crazy people who make decisions to fire successful college coaches when they have a bad year.  The latest is Auburn University, running out football coach, Tommy Tuberville, this week in Alabama.

From Ivan Maisel at ESPN:

"You're Auburn University and your cross-state rival Alabama, after lying dormant for a decade, has become formidable again. You've had a mediocre season and you won't play in a bowl game for the first time in nine years. But you're OK. You have a coach who has been the model of stability in an unstable business.

You've had Tommy Tuberville for 10 seasons. That became the longest tenure of any coach in the Southeastern Conference once Tennessee fitted Phillip Fulmer with a pair of cement coaching shoes. Even after going 5-7, your coach has won nearly 70 percent of his games against everyone (85-40, .680), and exactly 70 percent (7-3!) against the hated Crimson Tide.

Tuberville has won one SEC and five Western Division titles and been unbeaten one season. That 2004 team performed well enough to play for a national championship. Too bad the BCS ripped you off.

Having a coach like that is good. The last thing you want to do when facing Nick Saban Inc. is call in the moving vans and start over. Only someone with an athletic death wish would trade in a coach with 10 years of recruiting ties throughout the Southeast for a staff that might not be able to find 6A finalist Hoover High with a pack of bloodhounds and a Garmin.

You've got a new athletic director, too. Surely they wouldn't be stupid enough to make the same mistake and run off Tuberville. During games, he barely has a pulse. They call him the Riverboat Gambler for his play-calling guts. And big games? Not only is he 7-3 against Alabama, he has won nine of his past 14 games against top-10 teams.

It's like they say on Wall Street. When the masses are selling, the smart guys are buying. The SEC masses are selling. Tennessee is starting over with 33-year-old Lane Kiffin. Mississippi State forced out Sly Croom. You want to know what not to do? LSU fans are grumbling about Les Miles one year after he held the crystal football!

Remember this scene the next time you're thinking about pulling the trigger on the salesperson who was at 160% of quota for 2 years, but has hit a rough patch over a two to three month period.

The recruiting you do for the backfill is going to be a crapshoot. If you're lucky, you'll do as good, not better…

And Auburn University will be looking for another coach in 4 years.  Tuberville?  He'll be at an equal or better job somewhere else, making his former employer look foolish…