Recently, while doing some research online, I ran across “Second Life: The Business Case for HR in the Virtual World,” an hour and a half program offered up by one of DC’s lesser known Human Resource Groups – the HR Leadership Forum (HRLF). My interest was piqued as, nearly a year ago, I started to learn all about Second Life and the wonders of the virtual world thanks to my day job.  I am more of a minion than an HR Exec, but thought I’d go to this program just to see what was offered.

Not familiar with the HR Leadership Forum? Neither was I.  It is a DC Metro membership organization 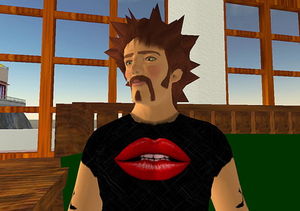 for Senior Human Resources and Organizational Development Executives and is an affiliate of the Human Resource Planning Society.  From their online schedule, it looks like they prefer to run their morning programs out of Arlington, easily accessible from Metro’s Ballston (orange line) stop.  HR Execs pay a membership fee of $350/year which gets them into 8 educational sessions, 2 social events and additional perks.  HRLF has also secured sponsors like Lee Hecht Harrison, Willmot, Knowledge Bank, Arbitron and more to assist with off-setting the costs to put on their near monthly programs.

The planned event was a combination of networking and presentation, and you can’t find a better place to network with some of the top HR thinkers in the DC metro area.  These aren’t your recruiters (or minions for that matter!) – these are your upper level management people – the ultimate decision makers and strategizers.  An incredibly welcoming group, interested in meeting others, and everyone worked the room.  With more than 100 people in attendance, it’s important that the majority of these Gen X and Boomer management types were excited about the pending presentation on Second Life and most were unfamiliar with the site and what it could offer to HR.

HRLF’s programs are coordinated by HRLF Board Member and super connected Hector Velesz of Reston, Virginia based HireStrategy.  His HRLF team secured Steve Mahaley of Duke Corporate Education and Tony O’Driscoll of North Carolina State University to educate the members of HRLF on Second Life.

And what a fantastic job they did – going beyond the power point slides that they had prepared and setting up a live interaction within Second Life (and by using Skype) which included guest presenters Dr. Robin Teigland from the Stockholm School of Economics and Chuck Hamilton (aka SL IBM Guru!), Learning and New Media Program Manager for the IBM 3D Intranet Team.

The program offered up by team Mahaley did not focus on recruiting on Second Life – but more on the ability to work in collaborative groups within the virtual world and the advantages it will give corporations in the future.  O’Driscoll illustrated one way that he uses Second Life is by running his office hours for students from there.  They wait in line just like they would on campus, have social interaction, and all from the comfort of their home and typically at a much later hour than would be afforded if the office hours took place on campus.  And the cost factor can be exceedingly low; SecondLife is free as is Skype.  Creativity is truly where cost comes into play.

One of the most interesting take aways I had from the program is what a Second Life collaborative work environment could mean for diversity.  Second Life avatars can be anything visually – dressed as typical “real world” inhabitant or taking the form of some other worldly animal or even paring it down to a skeleton.  By doing this, participants in Second Life are forced to listen to their counterparts at work and focus less on outward appearances – an interesting concept to explore as Diversity programs are becoming more and more key in businesses of all sizes and as listening becomes more and more key to being successful in the workplace and online.

In the end, I’ll be dusting my avatar off and heading back to Second Life to tour the sites I saw while at HRLF.  I’ll also be going back to HRLF, to find a local professional organization putting on top notch programs on a regular basis – well that can’t be missed!