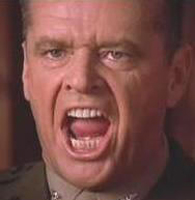 The point of Kotter’s quote was to highlight that the essence of leadership is to compel someone to do something s/he wouldn’t do on his or her own. To move a person to act in spite of fear, in spite of uncertainty, in spite of self-doubt… ultimately, in spite of him- or herself.

Good leaders point people in a direction and herd them along, using carrots, sticks, and various trade-offs to “motivate” them. Great leaders make people believe in something greater than themselves, truly motivating them by giving them a role to play—and I say this without being flippant—in changing the world.

Good and evil? That’s an entirely separate matter. America’s first and arguably greatest leaders, the Founding Fathers, made a deal with the devil regarding slavery in order to see our nation born. Thomas Jefferson’s morality was and is still hotly debated; his leadership abilities are not. These concepts, while closely linked, are distinct.

If you—like my Twitter pal—want leaders who never go to war, then I’ve got bad news: your world is too simple. Jack Nicholson’s Col. Jessep had it right in A Few Good Men: though he may look grotesque and repulsive, we do need him on that wall. We need leaders who are amoral enough to be willing to sometimes fight for peace, as ridiculous as that sounds. I hope they never need to, but should they be tested, I don’t want them debating the morality of throwing a punch, or throwing a punch too hard. At that moment, I want them to hit hard enough and fast enough to ensure victory at minimum exposure, cost, and risk.

Leadership is not always nice. Now and then, a leader has to step into the funk.

I hope that every leader the world knows from today forward is savvy enough to avoid ever having to fight another battle… ever.

But I also hope that society is wise enough to tease apart the ideas of leadership and morality, and to recognize that great leaders sometimes execute—and execute well—in morally reprehensible situations such as war.