If it’s not already painfully obvious, I like to get ideas from other people and share my own.  Sometimes 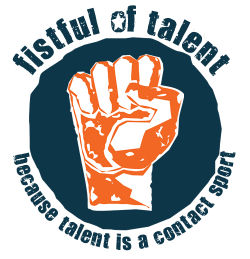 it’s good, sometimes it’s average – but it’s never boring.  That’s why I’m excited to announce that we’re launching a pilot of a new video show at Fistful of Talent on Thursday.

We’re still playing around with the name.  For now, we’re calling the venue FOTv.  The idea behind the product is that we’ve got some great contributors over at FOT, and while I love the way they write, I know they have even MORE to give.  So, we stuck a camera in front of them at the same time, threw a list of topics on their lap and said…. “you’re on….GO!”

First up, on Thursday are me, Jessica Lee and Josh Letourneau.  We’re riffing on camera about the EFCA, social media, needy candidates, firing employees who interview for other jobs and job descriptions that suck.  We also take a shot at wondering aloud why JLee didn’t get her apartment rented out for Inauguration Day.  What a missed revenue opportunity…

Stop by and take a look on Thursday!  We’ve got tons of ideas to keep the format fresh moving forward, so we’ll be experimenting a good bit in the months to come with the product.  Expect to see Tolan, Hogan, Hebert, McClure, Dingee, Uranga, Pankow, Rapp and Seiden buck up in the near future as well.