I am going to take a page out of the Kris Dunn handbook, today.

I am a big Seattle Mariners fan.  Like many people in Seattle, I am a transplant to the city. I jumped on the Mariners bandwagon in 2001, the year they picked up Ichiro and won 116 games.

In 2000, the Mariners traded their “home town hero” Ken Griffey, Jr.  Coming late to the game, I have a 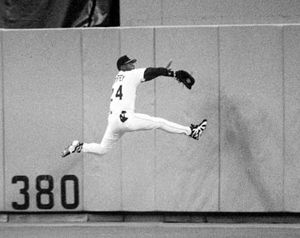 slightly different opinion of whether or not the Ms should fork over millions of dollars for an aging outfielder who so unceremoniously complained about everything until the team traded him.

All the recent rumors of a 2009 Griffey acquisition have me thinking about rehires.  It’s not uncommon to hire someone back into your company.  It’s easy to see the advantages to rehiring someone.  They know the culture, they know the tools, and they know the key players.  But, we should always exercise some caution.  These people left for a reason.  That reason can be one of a million things.  But, it’s important to make sure that the reason is either now irrelevant or that it’s not a concern to the candidate, anymore.

We should ask potential rehires, “Why did you leave?”

If they respond with, “Well…I was concerned that the new ballpark was too big and I couldn’t hit home runs,” this may be a flag if your company works out of the same ballpark.  We don’t want to bring a person back if they are still unhappy with their work environment.  If they left due to a poor manager, is that person still in the chain of command?  If they left due to limited upward mobility, what does their career path look like, now?

We should ask, “Why are you leaving your current company?”

If they respond with, “The company doesn’t want me anymore because I cost too much money for what I contribute,” you should be concerned if he is trying to negotiate an $8 million dollar offer from you.  At many companies, there is often a perception of “I have to leave to get a good raise.”  While pay is a legitimate reason to want to change companies, how long will it be before you are potentially, once again, not paying the person enough to keep them?  5 years?  1 year?

Finally, we should ask, “Why do you want to come back?  What is different now from 9 years ago?”

If their response is, “The fan base from my last companies have turned against me, so I want to return to the comfort of the blindly loyal fan base I have here,” then you can hold that in your pocket when they tell you they want to make $5 million more than you want to pay them.

Rehiring Griffey could be huge!  With him, we could get a rehire like Steve Jobs.  Someone with a huge name, who has done a lot for the franchise, and who will bring in lots of money.  Or, as a friend told me, you could get an ex-girlfriend.  It’s easy to remember the good times.

But, soon after, you’re reminded of why it didn’t work.