I had the delightful experience of getting to speak to the Staffing Alliance of Maryland Employers (aka ProjectSAME) in mid-February.  I’ve taken in some of their programs many times over the last 15 years that I’ve been involved in HR in the Montgomery County corridor- it’s a great group.  Never overlook the local groups – especially here in D.C., we had attendees from all kinds of companies, and I have to admit I even got a chill knowing the NSA was present.  (That is so cool…) 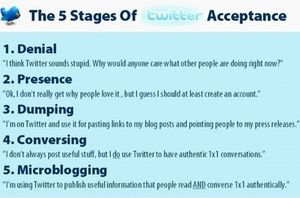 favorite moments of the day was when I started in on Twitter.  Over the years as a sourcer, I have had moments when I’m describing what I do, or how to source, and I’ve seen non-sourcing counterparts literally have their eyes roll back in their heads because it was just too much info at once.  I have always figured it was some kind of karma for the number of times I did the same with the engineering managers I use to work with.

But, as I’m talking about Twitter and stressing how it can be used to build brand, peer community, talent community, and of course to find people, I realize my group is looking at me funny.  And no, I didn’t spill anything and I wore my smart blue shirt as one of my Tweeple suggested.  At first I thought it was because I had said something about getting all of your information across in 140 characters.  But I started to realize I was using words like Tweet, Twittered, Tweeple, Follow, DM, “@ replies” and more, and that’s what threw everyone!  After being enmeshed in Twitterville for more than a year, I did have a second language!

So if you’re new to Twitter and need to get the lingo, I thought I’d track down some links for you.  Mashable is one of my favorite sites for keeping up on social media, not just Twitter.  Back in November, 2008, they created a nice list of Twitter specific terms that you can quickly view here.  Mashable also references Twittonary, another great site that allows you to type in any Twitter related site or scan their subsections to get apprised of all the various terms related to Twitter.  And, bonus, you can follow Twittonary on Twitter!

Want to get even further into Twitter? Check out this FanWiki. And remember, the next time you’re chatting up a twitter newbie (aka “twebie”), give them reference materials, they’re going to need a whole new language for the land of tweets.