As you may or may not know, the world headquarters of the HR Capitalist and Fistful of Talent is the lovely city of Birmingham, Alabama, with roughly 1 million people in the metro area.  Great town – I'm not from the Magic City, but my wife and I came to Birmingham right out of undergrad and are approaching the 18 year mark in Birmingham, so it's now home.

Now to the topic – as you might expect, outsourcing to India is alive and well in Birmingham.  The usual 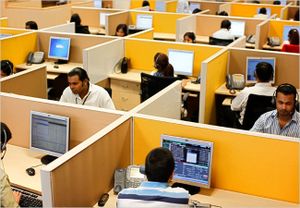 suspects are in play – corporate citizens to the Birmingham community, outsourcing call centers to India, tech firms outsourcing development coding to Bangalore.  All the things you expect, because where there is business, there'll be outsourcing.

But let me say this – if the job of a full life cycle recruiter for the Birmingham market can be outsourced to India, outsourcing has gone to the next level.  And it's happening in Birmingham.

1. I had a lunch a couple of weeks back with a technical recruiting group (developers for the software industry, etc) I hadn't met before, put together by a connection from my past I hadn't seen in awhile, who was now part of the recruiting firm in question. I asked a couple of questions and was shocked by their business process.  More on that below.

2.  This article at Workforce Recruiting, focused on offshore competition for the American recruiter.

So, here's what I found out in the lunch with the recruiting firm in question, which I consider to be a pretty sharp bunch.  They've long used outsourcing as a means to "source" candidates, but they've now moved to the next level.  In addition to sourcing candidates using resources in India, they've also handed off the next level of activity to outsourced recruiters in India.  That means outsourced recruiters who understand the technologies in play are making the initial calls to prospects, qualifying them, and locking them down for the next step, which might be a phone screen or in-person with the actual recruiting firm, or if the specs are nailed, a phone screen or in-person with the client company in question.

Here's the kicker – low cost, robust technologies like Bullhorn, which allow recruiting shops to manage the lifecycle of the recruiting process for a single candidate from anywhere on the globe, have enabled the manager in question to outsource this function.  All he needs is the right talent overseas, and he pays 20-30% of what he would pay a full life cycle recruiter located in Birmingham to do the same job.

And in a recruiting world where technical candidates are used to getting 5-10 phone calls a week from search firms, hasn't that initial call turned (at least somewhat) into a commodity?  The firm in question dramatically reduces their cost structure and then there's the real kicker — they feel like they get twice the work for one/fifth of the money when using an Indian recruiter, who by the way, is working crazy hours so they can be available when the Birmingham, AL candidate pool is up and working.

Crazy times my friend, with this lesson.  If you are a recruiter working for other people, you better be really good as globalization continues.