You gotta like the CEO as change agent when you see it.  Consider the example being set by new Yahoo CEO Carol Bartz: 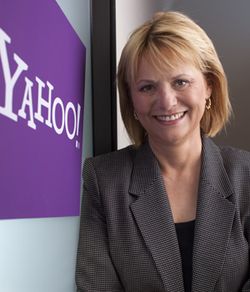 in product development, which will now be headed by Chief Technology Officer Ari Balogh. "We had a lot of people running around telling engineers what to do but nobody was ******* doing anything," she said on the conference call.

Bartz also offered few details on Yahoo's strategy for restoring growth besides asserting that the company would benefit from a turn in the economy by virtue of its size and presence online, and that it would focus on "creating kick-ass products."

Bartz, 60, took over as CEO in January. She said at an investor conference last month that apart from “core” products such as the home page, news and e-mail, “everything is up for examination” at Yahoo. She described Yahoo’s home page as old- fashioned and said she prefers Google Inc.’s maps site to Yahoo’s.  Bartz also said said last month that she created a “wall of shame” for products she isn’t happy with.

But for every wind of bluster for the CEO of a publicly traded company, there's an analyst community ready to measure results.  So, the Sam Zell approach probably works for awhile, but the rock star CEO ultimately gets measured by a different scoreboard:

"I came away with no impression for what the company's going to do," says Jeffrey Lindsay of Sanford Bernstein & Co. "We couldn't see the strategy of how they're going to grow the business again."

While the first-quarter performance may have bought Bartz more time to work her magic, it's unclear how much more time she has to get Yahoo stabilized. "Her honeymoon days are numbered," said another analyst.