If you are like me, you’ve had a job or two in your career, and each stop along the way you pick up a few extra pieces for your wardrobe that you wouldn’t have necessarily picked out on your own.  These pieces usually are of the polo shirt variety, but they need not stop there as I’ve been given dress shirts, t-shirts, baseball hats, jackets, watches, sweatshirts – to date no undergarments – Thank you!

In almost every situation, these items were encouraged to be worn on Casual Friday’s (check on Punk 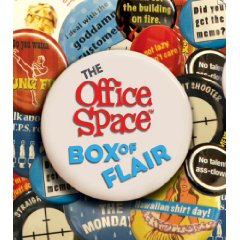 Rock HR’s post on Casual Fridays).  My question is once you leave an organization, what do you do with this corporate logo wear?  Also, where does it all go?

I have to admit that most of my previous corporate wear goes to Goodwill and I imagine (in my own little fantasy world) that somehow it all gets funneled into the international Goodwill community.  From there I know that there is some guy in need in West Africa wearing my “Applebee’s  #1 HR Peoplestacks 2007” jacket – not knowing what Applebee’s is or that he is wearing such a limited edition item.  I can say that I’ve never seen anyone locally wearing my gear, so at the very least I appreciate Goodwill for not re-selling my stuff local!  Can you imagine seeing someone at the movies wearing your shirt – how do you start that conversation “Hey – that was me – I’m the Applebee’s Peoplestack Guy!”

So, what’s the point?

I have to admit, it is usually us in HR who have the bright idea to reward our people with logo merchandise.  On one level we believe our associates will appreciate the gear and having the ability to promote the company they so proudly work for.  On another level, we are probably missing the boat completely – especially when looking at generational differences in terms of rewards and recognition.  I do believe Baby Boomers and the older Gen X set probably do feel appreciated when getting some of these rewards (assuming these aren’t the only rewards).  But, I would dare say, Gen Y probably doesn’t view this as reward and recognition – and actually might take this as a negative now feeling like they have to or should wear these items at work.

Rule of Thumb:  Save your money and challenge your department to come up with other ways to reward and recognize.  That being said – I’m wearing my Careerbuilder.com Logo Nike golf shirt right now – which just goes to show you, HR vendors need to go high-end to get into my closet!