If we were to take a quick poll among SHRM’s 250,000 members and ask… did you choose HR, or did you fall into HR as a career? I wonder what the breakdown in responses would be. Wh 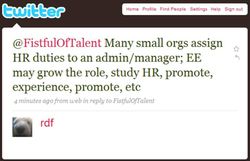 Like a lot of other HR pros I know, I fell into HR. Here’s the quick version of my story. In college, I wanted an “office” job to get exposure to the business world. It just so happened that I found a part-time job for a healthcare company doing admin work for their HR team. The position evolved and grew over time and then four years later, I was in a generalist role. I would say that classifies as falling into HR. I’ve chosen to stick with it though.

In thinking about “falling” into HR though – I started to wonder… why do so many HR people fall into this career? And maybe more importantly, why HR is so easy for people to fall into? Taking a quick Twitter poll on the topic, some interesting comments came thro 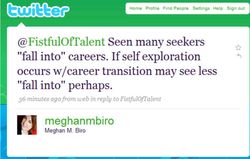 ugh including these included here…

Good stuff (And see! The lovely things you can learn through Twitter! I love using Twitter for a call and response…). You might ask yourself why we should even care about this issue in the first place; that’s fair. Here’s my argument – it absolutely matters that people constantly fall into HR, or rather, they don’t choose HR, for two reasons –

Ugh. HR can be easy to manage and do at times – even I’ll admit that. This isn’t science so much as I think it’s art… but that doesn’t mean anyone can and should do it, right?. I wrote about a similar theme a while ago when

we were interviewing HR intern candidates and the disappointment I felt with HR not being the career of choice for these candidates. I know the HR profession has some image issues… but could part of the solution be that we stop letting people fall into HR?

It might be a little hypocritical of me to say it, I realize this… but what if we continued working towards improving the profession and the caliber of our own talent… and really worked toward making it a career of choice, and we ourselves were a bit more choosy about who we let in? Or maybe I’m just dreaming again… but it’s something I’ve been thinking about of l 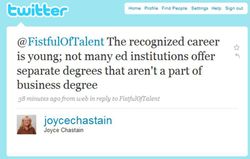 ate. Hit us in the comments and share your thoughts. Did you fall into HR? And why is HR so easy to fall into? Are things changing for the better though?