If you don't follow me over at the HR Capitalist, that's OK.  I can always buy time at FOT from the powers that be to tempt you to read my stuff here.  Here's a story I've been tracking for awhile at the HRC, and it always seems to come back up every 3-4 months.  There's some fresh meat at the end for the carnivores in the crowd.

Last week, I ran this letter to the editor at Workforce where an apparent former employee took SuccessFactors and CEO Lars Dalgaard to task for the culture at SuccessFactors.

Take a look at the letter linked – it's a nasty one.  If you've been in the people business long enough, you 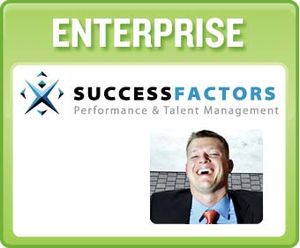 know that you can't please everyone all the time.

With that in mind, here was the question I ran last week at the HRC – Is it better to:

A. Openly promote the culture you seek (I'm talking external promotion) and risk the violent reaction of those former employees who feel like you never lived up to your promises/claims, or

B. Be more reserved in your promotion both internally and externally, with the risk of lowering the chances that all your employees clearly understand what you desire your culture to be about.

While SuccessFactors has clearly chosen Option A, what's interesting to me is that almost every other performance management solution provider takes the Option B route.  They're just much more conservative than SuccessFactors, which is not to say that they don't have great cultures and good stuff going on.

Instead, what it may mean is they've seen too much ex-employee reaction to the marketing of the SuccessFactors culture.  Here's a comment from over at the Capitalist from reader "DC", who was kind enough to go out to GlassDoor and see what ex-employees are saying about SuccessFactors.  Here's what DC reported back:

Interesting follow up post Kris. I noticed on your previous post on this subject that one of you commenters wondered if SuccessFactors had similar complaints logged on glassdoor.com. That was the first time I had ever heard of glassdoor, so I checked it out. For a company that claims to have a no jerks rule embedded in their code, Successfactors employees seem to paint a different picture. I’m sure most companies have some disgruntled employees, however even current employees of this company seem to say that the exception to the no jerks rule is the CEO. I don’t know the guy, but the comments about him and the way he runs the business are certainly at odds with their company’s creed. Look at some of this stuff – the one that stood out the most was the first one below from a former HR person at the company.

“I used to have to give this "company pitch" enthusiastically and didn't know whether to break out laughing or cry at my deceit. Someone at the company had better honestly address the extremely high and disturbing turn over at SFSF. During 2007, the turnover was 82%.”

“Management's behavior gives you the sense they feel you should feel blessed to work there, which makes employees feel like disposable commodities. CEO is not afraid to publicly blast or insult people on email, etc.”

“Bad behavior eventually catches up with people & companies. Look at Wall Street. Lars Dalgaard lacks integrity. Stop promoting the (No Jerk ) rule. If you are going to promote something of value then walk the walk instead of spewing out sound bites of Self-Righteousness.”

“In my time there, I never had a performance review done on me (yes that is the main product they sell), didn't get to participate in the 360 career development surveys for my management team (despite all of the "bible thumping" from the CEO over this) and was precluded from having career development discussions by my manager and his manager.”

“The CEO is volatile, the "no a-hole" rule is not followed, there is intense favoritism, the politics are rampant, the morale is very low, and there are constant fire drills (initiated by Lars) to accomplish things which are in direct conflict with what Lars says are the goals of the company.”

“I don't believe that Lars Dalgaard even takes the "No AH" rule (No Jerk Rule) seriously so why should the employees.”

“Ironically, for a company that provides solutions for HCM, it does not do a good job of Performance Management of its employees.”

Wow.  Thanks for the research DC.  I'll leave it here for today – If the 82% turnover figure is right, I'd abandon the external promotion until I got some things fixed, either on the selection or culture (i.e. retention) front.