I'll admit it – I had a smart, thoughtful post on the Workforce Recruiting article regarding Kelly Services attempting to migrate from the "Kelly Girls" image and brand, but I ditched it.  Instead, after I read Tim Sackett's reaction to the article, I decided to extend his riff.

Kelly Services doesn't need to change the brand from "Kelly Girls", they need to embrace it.  But they 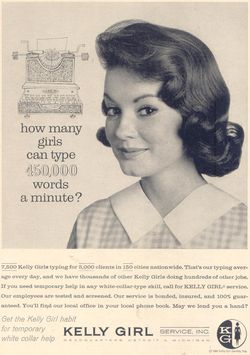 need to find the right spokeswomen to carry the brand forward in this century.

Here's my point.  Like Tim, I believe if the market already" has your brand position identified, have fun with it.  Be Kelly Girls, but change the game.  It doesn't have to mean the 60's era typist pictured to the right.  Instead, use the positioning and go find the smartest, edgiest women your ad budget can afford to be the face of the brand.  I'm thinking a good ad campaign to reinforce the new image wouldn't have one spokesperson, it would feature at least 4 or 5.

My top 5 candidates for the face of Kelly Girls and why:

—Jennifer Aniston – Obviously attractive, but more to the point always seems to play roles that have a good bit of intelligence in them.  Not a victim, quick on her feet.  Bonus for working at the Applebee's type of place in Office Space.  The actor in the ad rotation/mix.

—Janeane Garofalo – Don't shoot me for this one, because I know there's a lot of political stuff here.  The reason I plug Garofalo in is because you need the sharp, witty, crackback-based comedian who's approachable in the ad mix.  They can't all be models, because that doesn't seem real.  If you don't like her politics, plug someone else in that fits the role.  Next would be Wanda Sykes, but there's political baggage there also….

—Mia Hamm or an approachable athlete who's well-spoken to be named later – I've seen her in a couple of spots, and it works.  If her brand score is down, plug someone else in, but you need the active "girls aren't typists" thing working for you with this spot…

—Meg Whitman – We need a pure businesswoman/CEO plug here, and candidly, we need a recognition factor.  I'm assuming since Meg is planning to run for governor that she's quick on her feet.  I'd go with Carly Fiona instead, but there's some lingering effects to how it ended at HP.

—Julia Louis-Dreyfus – Why?  Because it works – in a big way.  Smart, accessible and funny, without being threatening.

Don't change the brand, Kelly Girls – embrace it, but update it.

Readers – who would be in your Kelly Girl 5?  Videos of Aniston and Julia below to imagine the possibilities…