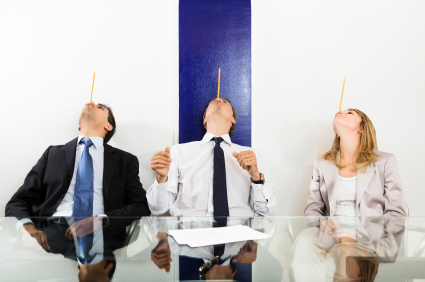 There are many ways to make the least of a training session. Some of them are quite colorful, thank you very much.

But it’s some of the more subtle forms of self-destruction that are so fascinating to me. Like the building
suspense of a violence-free Hitchcock movie, self-destructive behavior can grow from an innocent comment to an undeniable pattern that is as awesome for its audacity as it is shocking for its ability to grow unnoticed.

Here are three of the more surprising things I’ve seen while conducting training:


2. When you remark derisively about a subordinate who inquires about the dress code to an off-site training event, and then five minutes later answer, with a straight face and without irony, the same question from a peer, rest assured, you are blind to your problems and your top performers will be gone within three years.

3. When a presenter polls the group and, based on comments, indicates that s/he is going to go off-script and turn the presentation into a facilitated working session where participants can address the core issue facing them, and you later ding the presenter for making you take notes rather than allow you to sit there and doodle on a ppt handout, you should dock yourself a day’s pay to make up for the fact that the training was completely wasted on you.

Of course, there are many, many others. But like I said, sometimes the most subtle are also the most exciting.