OK – the latest list of Fortune's 100 Best Companies to Work For came out in February, and undoubtedly, there are a lot of great companies on the list.  After all, who doesn't want to work at some of the companies listed in the top 10.  Google?  Cisco?  Goldman Sachs?  Sign me up today, because it's all good.  I can't wait to experience the culture… the rewards… the freedom…

And that's just the reaction to the companies within the list that I know.  Also included are 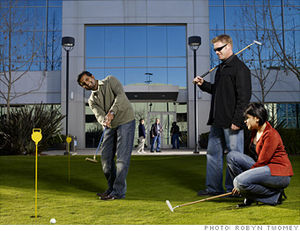 some incredible companies we don't know, who obviously have great environments where talent can bloom.

But, hid inside the underbelly of these environments is a dirty little secret.  The dirty little secret also applies to companies not listed as well.  I'll outline it for you two ways – one for the "best companies to work for, and one for "the unwashed masses".  It goes a little something like this:

–The golden rule – "A company's culture and attractiveness as a place to work is contingent on the effectiveness, approachability and progressiveness of your manager.  That means:

1.  A company often listed as a great place to work is often mocked by those within the company with an ineffective manager, and

2. A company not listed as a great place to work will receive many of the same retention benefits among employees, who have a great manager who reinforces, supports and leads.

Before you label me as a cynic, understand what I'm saying.  The leadership of a company can create an environment where talent can flourish, and tools, resources and freedom to innovate are present, etc.  Companies should strive to create that type of environment.  It's a good thing…

However, a bad manager can make it all worthless in the eye of an employee.  Consider the recent article about Google as reported by TechCrunch:

"In 2008 Google HR set up a private Google Group to ask former employees why they left the company. We’ve been forwarded what appears to be authentic posts to the thread by a number of ex-Googlers, which we reprint below minus identifying information other than their first names.

The thread shows a brutal honesty about what it’s like to work at Google, at least from the point of view of employees who were unhappy enough to resign. Top amongst the complaints is low pay relative to what they could earn elsewhere, and disappearing fringe benefits seemed to elevate the concern. Other popular gripes – too much bureaucracy, poor management, poor mentoring, and a hiring process that took months."

I would encourage anyone who feels like they aren't at a "best employer" to read the entire article.  The result for me is an understanding that the best employers in America struggle just like you do with many management issues, and the best way to ensure your employees are engaged is to be a good manager who coaches, cares, communicates and has flexibility.

What do your exit interviews say?  Most of the same stuff heard in the rundown at TechCrunch about Google.