I’m a fan and advocate of social media. Use it for your professional development as a recruiting or HR pro. Use it to find and source candidates as a part of your recruiting efforts. And the other area I find myself spending a bit of time talking about at conferences and such is using social media for employment branding. The potential is amazing when you think about how accessible it makes your organization when you use tools like Facebook and Twitter to promote your employment brand. It’s instantly friendlier, more approachable, likable… and of course, think about the message it sends about how cool or progressive you are as an organization that you’ve got a presence on Facebook. Right? Your brand immediately gets street cred for being ahead of the curve. 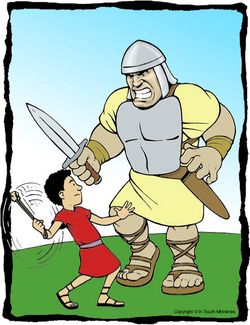 And I like to think about social media as the great equalizer. Let’s think about employment branding in terms of David and Goliath. And let’s use Google as an example. Google easily makes it to the Fortune list of great places to work, a great mechanism for enhancing your employment brand and attracting candidates. But Google has the money that can fuel a culture that’s rich with toys and perks which helps to land them on that list. They have the money for marketing and PR folks to do the leg work of submitting to sit in Fortune’s lap. And they also have the money to invest in their leaders – if not dedicated HR-ish staff to help continually cultivate and sustain the culture – all of which feeds into creating the big, bad employment brand they have. So, let’s call Google the Goliath in this situation.

But let’s say you’re a small organization – 100 to 500 people. How do you get the attention of Fortune magazine to drive candidates your way? Maybe you can’t, and don’t, and will never make that Fortune list. But what if you could use Facebook and Twitter and other tools to evangelize about your greatness and reach the talent pool you want to hopefully hire? These tools are largely free and anyone can use them – you just need to have the creativity, patience to build and sheer will to jump in. You’ve gotta be gutsy and be willing to go against giants. And for that reason, let’s call the small company David.

Pre-social media… there’s just no way David would have been able to compete with Goliath. A small company of 200 would have to do a lot – a LOT – to get exposure equivalent to landing on Fortune’s best places to work list. Social media though… what a great equalizer. Plus think of the added benefits of what social media does for your brand being conversational!

If we think about your social media tools being like a sling though, you’ve gotta have some stones to hurl at Goliath because Twitter doesn’t come loaded. Neither does Facebook. Which is the thing about social media for employment branding, and the point I try to hammer home whenever I’m talking on this topic… to use social media effectively for your employment brand means you’re giving people a glimpse into what it’s like to work at your organization and the promise you’re making to your employees. But you can’t make any of that stuff up. If your workplace is toxic and sucks, social media can’t save you. It won’t help you with your recruiting efforts. It’s not going to help you attract people to your organization. You’ve gotta go back and solve those issues first.

Social media isn’t the second coming. I’m the first to admit that. It’s just another tool for the shed… but it’s only going to work if you have the basics mastered in the first place. Learn to walk before you run, folks. And once you’ve started running, run like hell and hurl everything you can at Goliath.