I don’t watch that much television. I don’t. Ok – maybe just a little. Sure, I love college football and basketball and a few situation comedies (I’m a huge fan of The Office) by night – but not much else. I get bored quickly. There is however, an exception.

I am a fanatic and loyal follower of 60 Minutes. I have been for years. It’s hard hitting, engaging and very much 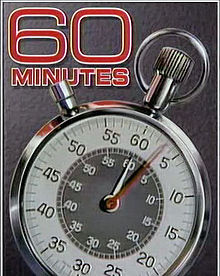 on point. I like that (and I love Andy Rooney). They dig and uncover great stories. The show has been incredibly successful and a Sunday night staple for many – including yours truly.

So why has 60 Minutes been so successful as a television show?It’s actually quite simple. 60 Minutes is based on this motto – “Tell Me a Story“. The motto was created by news great Don Hewitt. Hewitt created the 60 Minutes broadcast for CBS over 37 years ago. At the time of Hewitt’s death in August of 2009, 60 Minutes is the longest running prime-time broadcast in television history. Quite an accomplishment for anyone in the television business even after all of the increased viewer choices afforded by cable and satellite over the past 3 decades. What amazes me most about Hewitt was his simple yet effective lessons of success. “Tell Me a Story” is much more than a simple motto. It is what the 60 Minutes crew live (and die) by every single week. Plain and simple. He wanted each story to be short, concise, compelling and relevant. Not much to ask – right? He also wanted to control the details of everything that was important. He loved the attention to detail. More goodness.

I thought about Hewitt and his simple, yet effective motto and how that was relevant to the search business and a candidate interview. It made an instant connection with me. Let’s face it, unless we get to a video interview or we meet face-to-face, much of the early interaction with a candidate is done by telephone. Guess what? I want to hear their story. Yes – I want the elevator pitch, hard hitting success metrics and in the beginning, I too want short, concise, compelling and relevant information as to why the candidate thinks they are the very best person for the role we are recruiting for. No rambling, no long (uncomfortable) pauses – just the very best I can get out of a telephone screen. I want the candidate to tell me their story. It’s really that simple.

With the ratio of the unemployed to available job openings in September 2009 hovering at historical highs -all of a sudden, Hewitt’s motto ‘Tell Me a Story” seems more than just relevant to me and my search business. Think about it. It makes a ton of sense to me and yet it’s such a simple concept.

The next time you book an interview with a prospective employer – make sure you are ready to tell your story. If it’s good – I’ll bet you get to tell the story again – and likely in person!