If you haven’t seen the latest issue of Newsweek, the front page has a picture of a baby with the headline “Is Your Baby A Racist?”  The headline is in regards to an article within the issue “See Baby Discriminate” in which authors, Po Bronson and Ashley Merryman, study whether there is a beneficial effect by having multicultural story-lines delivered to children.  Bronson and Merryman also recently authored a new book, NutureShock, which claims modern strategies for nurturing children’s views on things like race, are backfiring. From the Newsweek article:

For decades, it was assumed that children see race only when society points it out to them. 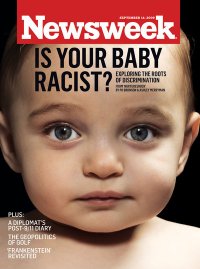 However, child-development researchers have increasingly begun to question that presumption. They argue that children see racial differences as much as they see the difference between pink and blue—but we tell kids that “pink” means for girls and “blue” is for boys. “White” and “black” are mysteries we leave them to figure out on their own.

It takes remarkably little for children to develop in-group preferences. Vittrup’s mentor at the University of Texas, Rebecca Bigler, ran an experiment in three preschool classrooms, where 4- and 5-year-olds were lined up and given T shirts. Half the kids were randomly given blue T shirts, half red. The children wore the shirts for three weeks. During that time, the teachers never mentioned their colors and never grouped the kids by shirt color.

The kids didn’t segregate in their behavior. They played with each other freely at recess. But when asked which color team was better to belong to, or which team might win a race, they chose their own color. They believed they were smarter than the other color. “The Reds never showed hatred for Blues,” Bigler observed. “It was more like, ‘Blues are fine, but not as good as us.’ ” When Reds were asked how many Reds were nice, they’d answer, “All of us.” Asked how many Blues were nice, they’d answer, “Some.” Some of the Blues were mean, and some were dumb—but not the Reds.

Bigler’s experiment seems to show how children will use whatever you give them to create divisions—seeming to confirm that race becomes an issue only if we make it an issue.

The concept of the Diverse Environmental Theory, which is the core principle behind school desegregation over the past 30 years, hasn’t been proven as effective in changing social stereotypes as the architects had hoped for when it was implemented in America’s public school system. University of Texas scholar, Bigler, an adamant proponent of desegregation states, “Going into integrated schools gives you just as many chances to learn stereotypes as to unlearn them.”  Having 30 years of experience in attempting to “equalize” our children in desegregated environments has had a huge impact to the workforce we are now, as employers, attempting to build into teams.

HR Pros are thrust into the middle of this debate and are perpetuating what our educational system has said to our future workforce throughout their entire “educational” life – we are all equal.

To be effective, researchers have found, conversations about race have to be explicit, in unmistakable terms that children understand. A friend of mine repeatedly told her 5-year-old son, “Remember, everybody’s equal.” She thought she was getting the message across. Finally, after seven months of this, her boy asked, “Mommy, what’s ‘equal’ mean?”

What needs to be changed, based on Bronson’s and Merryman’s research, is clear – dialog about race issues has to be transparent and brought out into the open.  Trying to talk around the issue, just polarizes both sides even further. The data also shows that as HR Pros, you are already behind the 8 ball on this.  Discriminatory behaviors and beliefs are established very early on, and as we know with adult learners, old tricks are hard to break.  So, having MLK Day celebration and putting a Menorah in the corporate lobby during Hanukkah isn’t going to have the impact that is needed to change behaviors.  Sitting down face-to-face and building real relationships and talking about real issues and struggles will.

Click through and read the article; it will open your eyes to many things and possibly help you rethink how your company should go after becoming more diverse.