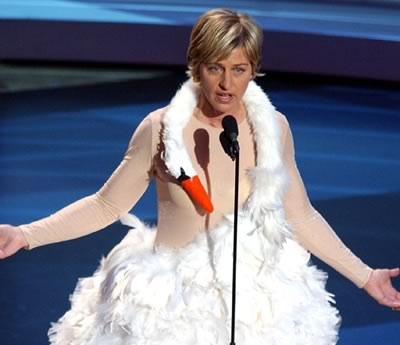 You’ve probably heard by now, Ellen Degeneres is going to American Idol as the fourth judge (replacing the ever sober Paula Abdul). This would have been big news in 2004 when the show was still uber popular, but has anyone watched it lately?

With the selection of Ellen brings controversy – the pick doesn’t make sense on the surface and doesn’t correlate with what she has done in the past. (Tssk, tssk. Maybe they didn’t use behavioral questions when they interviewed her.) That’s not to mention the fact that Degeneres has a questionable music background and is probably completely unqualified to judge a music competition. Then again, I had always assumed that is why she was picked. I mean, American Idol isn’t a music competition…

Lame jokes aside, Ellen going to American Idol does raise the issue of career paths. When we think about the career path of HR professionals, I’ve always thought it to be fairly rigid. You start off filing, you move up to a specialist area, move into employee relations or generalist roles, and then hopefully get promoted several times over to manager and director positions. Then finally a coveted VP or C-suite HR role. And that’s it, right? Life at the top is awfully hard.

Two months ago, I was working in a full time HR generalist role. I had just gotten back from a very successful SHRM conference and was feeling energized. Ready to conquer the HR world once again, I dug in.

Then job loss hit me like a sack of bricks. I wasn’t too scared (the financial aspect was covered for a while) but I hadn’t thought a lot about next steps after my last position. I started thinking about where I was going to go next, where opportunity best awaited me. I talked to Kris Dunn about the situation (you may have heard of him around here, though I hear he keeps a low profile). He planted the idea in my head about talking to vendors and offering my social media/blogging experience as a plus in that field, combined with inside knowledge of HR.

A week and a half after that, I was approached by a company called MeritBuilder that was looking to make a unique impact in the employee engagement and recognition space (more info about my story here and here). I’m excited about the new position but it was also a nervous one for me. Not because of the product or the company but because of losing some roots in HR. Losing roots in HR was scary because I thought of HR as my career path since the beginning. Because HR people often take a conservative career approach (seeing the many errant paths a career can go can do that to a person), I had assumed that the HR path was unflinchingly rigid.

What I’ve thought about since my eye opening experience with MeritBuilder is about how there are probably many areas where HR people can make lateral transitions. Rather than staying in the traditional HR track, an outside track experience can actually end up enhancing a person’s profile. This can include:

I’m interested in hearing about some of the other career tracks you’ve seen HR professionals. Where are HR professionals going to other than HR? And if you need inspiration, maybe some terrible dancing from Ellen and the President will help. On the plus side, at least she isn’t judging So You Think You Can Dance?