By now, you've heard of the saga playing out in the hometown of FOTers Jessica Lee and Kelly Dingee (Washington, DC). Gilbert Arenas, a sometimes All-Star for pro basketball's Washington Wizards, created a media and PR firestorm when he reportedly drew a gun on a teammate in the Wizards' locker room over a gambling debt.

You can read more about it here.  The bottom line is that the NBA (you can equate them to the corporate office with the Wizards being a branch, and Arenas a local, albeit crazy employee) got the report and sent their version of the employee relations/security team in to investigate. At the end of the process, Arenas wasn't fired because you can't fire people on guaranteed contracts – so they did the next best thing and suspended him without pay indefinitely.  Investigation complete.

You might see another NBA player emulating the thug life.  I see a primer in how to investigate a complaint when bad stuff happens in your company.  I'm an HR freak. 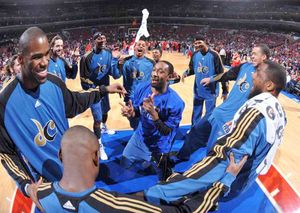 There are 3 things you need to remember when investigating a fairly complex claim with the high potential for layers of context.  Let's use my experience and Gilbert Arenas's case and kick some science.  It's easy if you act like a homicide detective, like my boy Frank Pembleton from my all-time favorite TV show, Homicide.  Follow along, kids, and you'll be running your own investigations later this week:

1.  Never, and I mean never, start the investigation by interviewing the person who is accused of the crime/policy violation.  I know, I know, you rookies are saying, "Kris, it doesn't have to be that hard, just grill the person that did it and get the admission via a statement".  That's why you're a rookie, skippy.  The problem with that approach is you can get the admission with a bunch of reasons, disclaimers and other factors that make the admission meaningless.  Arenas pulled a gun on a teammate.  Here's the statement you would have gotten if you took the "let's go straight to Gilbert and get the confession" approach, courtesy of Gilbert Arenas's attorney:

"I appreciated the opportunity to meet with law enforcement officials today. As the person who caused this trouble in the first place, I thought it was my duty to be the first witness to come forward and meet with the prosecutors and detectives. I told my attorney I wanted to get in for an interview as soon as we could arrange it, and that was today.

As I have said before, I had kept the four unloaded handguns in my house in Virecuaser ginia, but then moved them over to my locker at the Verizon Center to keep them away from my young kids. I brought them without any ammunition into the District of Columbia, mistakenly believing that the recent change in the DC gun laws allowed a person to store unloaded guns in the District.

On Monday, December 21st, I took the unloaded guns out in a misguided effort to play a joke on a teammate. Contrary to some press accounts, I never threatened or assaulted anyone with the guns and never pointed them at anyone. Joke or not, I now recognize that what I did was a mistake and was wrong. I should not have brought the guns to DC in the first place, and I now realize that there's no such thing as joking around when it comes to guns even if unloaded. I am very sorry for the effect that my serious lapse in judgment has had on my team, my teammates, the National Basketball Association and its fans. I want to apologize to everybody for letting them down with my conduct, and I promise to do better in the future."

Congratulations, Sherlock Holmes. You got the admission, but it's so watered down in terms of Arenas controlling the intent that you have nothing.  Since you started with Arenas and didn't have eyewitness accounts from those who watched the events unfold, you couldn't challenge the intent issue with any other information from witnesses, and you've hampered your ability to come back to Arenas once you have more data.  He's already made his statement, and you're holding the bag, full of whatever he wanted to give you. Nice work.

2. Start with everyone who witnessed the event in question, and don't be afraid to interview character witnesses who have seen the accused in similar circumstances.  Get all the information you can.  What was said?  What was the issue? Was it heated?  Has Arenas ever acted like that before?  Were their issues prior to that day between the two of them? Has Arenas had similar issues with other people in the past?  Did you know Arenas had guns?  Did he brag about having them?  Did they make him feel tough?  Did he loosely talk about shooting people, even in jest?

You get the idea.  Interview everyone you can, have lots of questions ready to keep them talking and once you've asked the question, SHUT UP and let them talk.  You'll be shocked how much information you get.  Go get that information from 7 or 8 people, then interview Arenas.  Now you have plenty to talk about, and it means you'll be in control of the interview with the Gilberts of the world.

3. The way people act during an investigation matters.  Factor it into the decision of discipline, terminations, etc. It's called JUDGMENT, people. The decisions people make while you are running an investigation matter, because they speak volumes about the integrity of the person in question.  I've had people act like model citizens while being investigated (the expected approach), but I've also had people talk smack, start fights, miss work and even be arrested while an investigation is being conducted.  It all counts.  If someone does something that makes you go hmm, they probably don't need the benefit of the doubt.  Consider the case of Arenas, who while under investigation for drawing a gun on someone, actually did mock shooting of teammates during warm ups in a televised game.

Irrepressible to the end — which Arenas triggered prematurely with a pregame skit Tuesday in which he pretended to shoot teammates — the Washington Wizards star was suspended indefinitely Wednesday by NBA Commissioner David Stern.

League sources said Stern is prepared to suspend Arenas for the rest of the season, but will let the legal process play out before making a final decision.

Stern intended to let the process play out before doing anything, but that went up in smoke after Tuesday's pre-game introductions in Philadelphia, where Arenas' teammates circled him and he put his thumbs up, index fingers out and pretended to shoot them. Stern announced that while it was clear "Mr. Arenas" would get a "substantial suspension and perhaps worse," the player's "ongoing conduct has led me to conclude that he is not currently fit to take the court in an NBA game."

Investigating bad stuff your employees do – it's part of the job.  The best advice I can give you?  Be aggressive and don't be a victim.  Follow these 3 simple steps, and you'll be off to a good start.