For regular readers of FOT, you’ll notice that we have an affinity for the ESPN show Pardon The Interruption (PTI) where hosts Tony Kornheiser and Mike Wilbon face-off during a half-hour show devoted to commenting on sports – basically it’s two knowledgeable (and funny) sports guys having an opinion of what’s going on each day in sports.  For the most part, they say what’s on their mind, and try to make it interesting – we’ve modeled our own FOTv show after PTI.

Interestingly enough, PTI host Kornheiser was suspended by ESPN this past week for remarks he made about the wardrobe of fellow ESPN employee and SportsCenter host Hannah Storm. From the article: 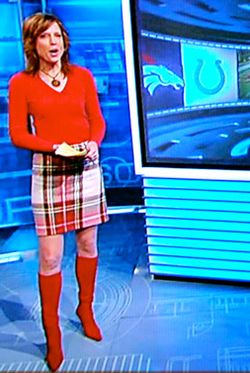 …Kornheiser described an outfit Storm was wearing at ESPN last week as “horrifying,” saying her shirt was too tight and looked “like she has sausage casing wrapping around her upper body.”

Kornheiser said he had called Storm to personally apologize for the remarks.

“If you put a live microphone in front of somebody, eventually that person will say something wrong,” Kornheiser said on his show Tuesday. “This was one of the times I said something wrong.”

ESPN has been troubled by a series of workplace issues involving alleged misconduct by its television personalities, though they have involved behavior off the air.

It’s an interesting dilemma we face in asking our people to have opinions.  The dilemma is that once people get comfortable in giving their opinion, they move closer and closer to a gray area that can get them into trouble.  Did what Tony do on PTI constitute a suspension?  When it comes to workplace culture and how the organization wants to be viewed professionally, heck Yes!   When it comes to workplace harassment, again, I would say the suspension is due.  The problem I have is putting someone (Tony) into a position, where to get ratings he must have interesting, funny, strong opinions – and then disciplining him when such opinions come out.  It reminds me of my favorite movie – A Few Good Men – when Jack Nicholson goes off on Tom Cruise about questioning the way he provides freedom –

It’s a classic Employee Relations issue that any HR Pro will face in their career, and probably multiple times.  An employee trying to be entertaining, funny, interesting, etc., goes too far, steps over the line and says something that is hurtful and/or disparaging.  As an HR Pro, the call is pretty simple. You must react, and weigh how damaging the remarks were to the individual, to the employee and to the culture – along knowing that the decision you make will be watched closely by the entire staff.  Go too harsh or too light, and you risk mutiny by the troops in support of one or the other sides involved.

Context is everything in these issues – if Tony would have had Hannah co-hosting with him on the show when the comments were made, and she had a chance to retort about his awful appearance, do you think their would be a suspension involved?  My guess is Tony and Hannah probably get along very well as professionals and have high respect for each other.  I believe ESPN was appropriate in their response, they didn’t right ditch – left ditch this one as we sometimes do as HR Pros.  They measured the response from internally and externally, made sure both parties were satisfied with the outcome, then executed the response.  From an externals view point, looks like the HR Pros at ESPN did a pretty good job.

What do you think?  Should ESPN have done more or less? And what was Hannah Storm thinking with that outfit?!