Sometimes it’s easier to just whine and moan. As a blogger, it’s fun too. It gets y’all going. It drives up traffic. It solicits lots of comments. And let’s face it – as HR and recruiting folks, there’s a ton of whine-fodder. I could start with the pitiful state of HR and how most HR people stink. I could rage against the machine called SHRM (which admittedly, I’ve done before). I could also go on and on about so-called thought leaders in our space who wax poetically about the value of social media in HR and recruiting or some other great fad but have no results to show for it. There are plenty of folks in our little blogging world who are already doing these things and doing it well though. So for me? As I continue to blog, I’ve decided to try my best to focus on practical, actionable stuff. 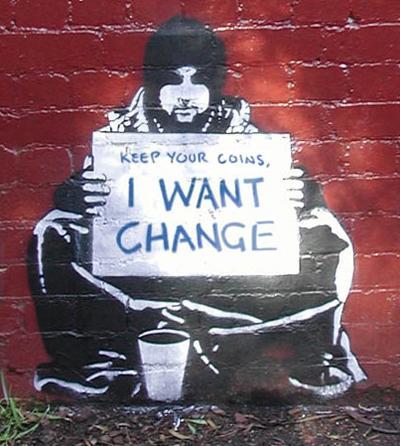 I was catching up on my latest issue of Fast Company recently which held an excerpt from the book Switch – How to Change Things When Change Is Hard, by the authors of Made to Stick, the Heath brothers. The idea? Find bright spots and clone them, which they believe is the first step to fixing everything. And it got me thinking about all this whining and made me wonder, for what? Why do it? Does it help solve anything?

“A problem may look hopelessly complex. But there’s a game plan that can yield movement on even the toughest issues. And it starts with locating a bright spot – a ray of hope… You may not be fighting malnutrition, but if you’re trying to change things, there are going to be bright spots in your field of view. And if you learn to identify and understand them, you will solve one of the fundamental mysteries of change: What, exactly, needs to be done differently?”

And it’s true. I’m not fighting malnutrition as an HR pro. A big problem we do face though is the bad rep that HR has and the number of bad HR “pros” out there. Deep down inside, however, I know that HR can be better. We can do better and we can make it better – which is one of the huge reasons I continue to blog. And I hope it’s the reason you continue to read. And we both know that there are bright spots in the work we do – it’s just that we don’t talk publicly, or loudly enough about it. So, here’s what’s missing – bright spot evangelizing, as the Heath bros call it because, “…These flashes of success, these bright spots, can provide our road map for action – and the hope that change is possible.”

Take that in for a moment. Bright spots = a road map for action.

So I’ve kinda gone all Jerry Maguire on you with this post. But it’s just that I’m pretty sure that you’ve got a manifesto in you somewhere deep down that you want to share with the world. You do, right? So, time to do something. FOT friend John Sumser has launched a contest at his newest venture, HR Examiner. Submit a 200 to 1000 word essay describing a game-changing HR led strategy that you could announce by February 28 in your company and begin implementation by the end of Q1 2010 – around the time the Apple iPad is set to ship. As John writes, “See this as a way to re-challenge your own assumptions for 2010 and that of your organization – even what HR ‘does’. Assume that your CEO loves the idea, the CFO is cutting the check, and that you will get everything you need to make your plan happen. Tell us how HR will transform your company into a better place to work and work better.”

And in return? Win an iPad or other Apple goodies. Read more about it here. But the iPad is just a perk. The real goal with that whole exercise? In my book? It’s bright spot evangelizing. Spread the word folks, spread the word.