I was chatting with a recruiter friend the other day about job offers. It’s probably one of my favorite parts of my job. But we’ve started noticing a somewhat disturbing trend…

Let me set the stage. My pal picks up the phone to make an offer to a candidate. They talk through the 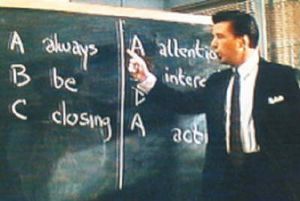 details, the candidate was excited as can be so they talked about a possible start date… and then she says she’d give her notice after she received the offer in writing. My recruiter pal says sure, and that she’d send her an email outlining what they had discussed and once they had a start date finalized, she’d put the offer letter together and have the powers that be sign the official letter.

The candidate said great, but she wanted to know when she would receive a signed offer letter. It seemed she wasn’t willing to give her notice until she had something in her hands with an actual signature. She wanted real ink.

Am I the only one who thinks this is sad? She was given the offer verbally, she received a follow up via email outlining the terms discussed… but that wasn’t enough. And mind you, this was a corporate recruiter extending the offer directly. There was no middle man there.

I’ve seen this a handful of times, too. And I’m not sure I “get it” completely. To check my gut, I sent a tweet out about it and the responses floored me – both via tweet and separately by email. Recruiters and HR pros saying they understood candidates responding in this way… it seemed there were a handful of folks who have had to rescind offers in the past, or that once offers had been made, they have had positions fall through, budgets disappear, or the requirements of a position changed… and job seekers who came back also saying they felt the same way about needing something in writing, with an actual signature, because they didn’t trust verbal offers, probably were the recipients of offers made by the very same recruiters who responded to me… sigh.

Is anyone else confused by this?

First, I understand that given the state of the economy and the uncertainty all around us, sure. It isn’t unreasonable for a candidate to want an offer in writing. Leaving a job for another job… it could be understandably a little risky. But I struggle because I just don’t understand why the relationships that I’ve built with candidates, my word, and a confirmation via email isn’t enough? Isn’t that a lot to give? I mean, come on! When you put all three together, why would you ever think that I’d go back on my word?

But, maybe, more importantly… why have so many job seekers been jerked around when it comes to employment offers that they have to be so overly cautious? I mean for those of you making offers out there, what the heck are you guys doing?

If you’re a recruiter, sure, make the excuse that something happened behind the scenes that you weren’t aware of and surfaced at the last moment, after you made the offer to a candidate. Maybe it was a budget issue, a contract issue, an issue with your hiring manager. Make all the excuses you’d like. For me? The reality is simply that you weren’t communicating enough, weren’t in touch enough with the business, or your internal communication or approval channels suck. You should never make an offer that you can’t keep and that you don’t think will be accepted. Be in touch with the business. Do your homework. Make sure everyone is fully aware, in the know, in the loop, and ready for the offer to be accepted… otherwise?

You’re doin’ it wrong. And you’re embarrassing me because candidates now have doubt about my word and whether I’ll come through… and that just ain’t right.