Talent getting old is tough on a team.  Take the case of Tim Sackett, who turned 40 over the weekend and whose significant other (that's "wife" for those of you with your head in the Tiger Woods gutter) was nice enough to send me the 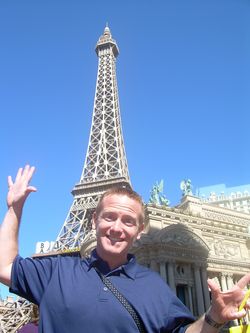 photo appearing to the right to mark the occasion.

Let's take a look at this photo and examine the downward slide of Tim Sackett since he once was rocking the beer keg in East Lansing with Jud Heathcote:

Hair – Tim's gone to the buzz cut.  He's clearly given up, like my late Grandpa Harry, who used to take a nap on the floor during a lunch break from work due to his bad back.  I used to rub that hair as he tried to sleep on the floor and I would marvel at how bristle-ly it was.  If I ever meet Tim face to face, I'll be reminded of Grandpa Harry.  Cool.

Travel Preference– Let's just say Tim's not cosmo enough to have a Eurorail pass.  He's in Vegas in this picture, like every other 40 year-old you know, so that's not Paris in the background.  If we swung the camera to the right, we'd probably see his Entourage-like posse, except the recruiters who work for him would be standing in for Eric, Johnny Drama and Turtle.  They didn't have a choice, Tim made them come, and he calls the shots at HRU.   That's what you do when you're old, Gex X style.  You find some Gen Y types to boss around; that and wonder when boomers Bill Kutik, John Sumser and John Hollon are going to retire so you can take your rightful place in the talent world's Hall of Superheros.

Camera-Strap – Seriously, can you get any more white, 40 and midwestern?  Again, he's given up.  Why even bother to hide you're a tourist when you are 40+ and visiting the Strip?  He'll have the strap in the same place when he hits the $5 tables downtown later.  He'll tell you that's the "real" Vegas, to show his Mikey from Swingers sensibility.  He'll soon be playing alone at those tables, since he'll repeat the six Oceans 11 quotes he knows repeatedly, even driving off the grandmas who think he looks like their son.

Buffet-Pass– Look at his left hand.  He's bought a 3-day buffet pass so he doesn't have to deal with the stress of trying to get comped at the $5 tables downtown.  Not before he went to check out the buffet visually, however, just to make sure there was banana pudding on the bar.  He's adamant about that. That's why he's the boss.

We here at FOT are proud to provide a workplace where age doesn't matter, even if you're cranky, cynical and shout out things in your blog post like you're my crazy uncle Steven at the Christmas get together.  Things like this or that.