In case you missed this, a Detroit, MI city employee sued the City of Detroit after claiming the perfume a co-worker was wearing caused her not to be able to do her job.  Apparently, the perfume and room deodorizer that her co-worker was using made it uncomfortable for this employee to work to the point she suffered migraines, nausea and coughing.  From CBS News: Stink Over Perfume at Detroit Workplace: 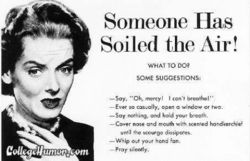 “CBS News correspondent Bianca Solorzano reported on “The Early Show“ that city employee Susan McBride complained she was “chemically sensitive” and a co-worker’s perfume and room deodorizer made it difficult for her to breathe and do her job — so much so that she suffered migraines, nausea and coughing.

Ann Curry Thompson, McBride’s attorney, told CBS News, “You can’t come into a workplace loaded in one of these so-called designer perfumes that broadcasts itself across the room.”

McBride won a $100,000 settlement. Detroit city employees in the three buildings where McBride works are now being warned not to wear scented products, including colognes, aftershave, perfumes, and deodorants, or even use candles and air fresheners.

Thompson said, “When you have a stated policy in the workplace, it gives an employee something to point to.”

So, let me get this right.  Employee puts on perfume so not to offend, uses room freshener, so not to offend, – employer pays $100,000 because an employee was offended?!  Only in Detroit!  I’m just shocked that there weren’t unions involved with something this ludicrous.  Can you imagine the HR Pro in that office having to deal with this stuff?  We (the collective HR Pros of the world) should come together and send this person a basket of non-hypoallergenic, non-scented, non-flavored something of some kind – she/he deserves it!

But what really gets me in this whole piece is the little jab at the end by the lawyer stating:

“When you have a stated policy in the workplace, it gives an employee something to point to.”

In my time, I’ve had to deal with employees who stink – and not the good stink… and I’ll take Teddy in Accounting wearing a half a bottle of Polo Black any day over Body-Odor-Brad in Production.  I can talk with Teddy about the difference between the conference room and the nightclub – but talk about an uncomfortable conversation though with Brad!  There is no HR training in the world that prepares someone to have the Body-Odor conversation.  So, to have to pay $100,000 for someone stinking in a “good” way? I’m just not sure what this world is coming to…