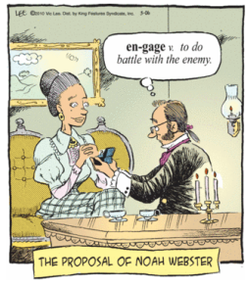 The cartoon at the right ran in the paper recently.

‘Cuz I’m weird the first thing that went through my mind was – “wow – if that really is the definition of engage then maybe we need to revisit this whole ‘employee engagement’ thing.”  Maybe we should be looking for a new “catch phrase.”

Not being one to take a cartoon at face value I checked it out.  Wadda ya know…Here are some definitions from Merriam-Webster Online Dictionary (highlights mine):

Let’s look at the word engagement in case there is some changes in the way it’s interpreted when it moves from a verb to an noun:

Is it just me or do those definitions paint an entirely different picture of what we really want when we talk of engagement?  The cartoon was pretty much on target – engage, and its big brother/sister engagement – has some pretty heavy baggage associated with it.

Don’t get me wrong – I do think in normal usage it is much less inflammatory but it does may you think.  Don’t we want our interactions with employees to be positive and uplifting – not “binding” or “ in conflict.”

What about Employee Participation?

Thinking through all the possible words we could substitute for engagement I came up with:  Participate.

Doesn't that sound a bit more like what we want?

We want people to be a part of and share the culture and to be part of a related larger whole.  To me – I like the idea of participating in a company rather than being “engaged” by the company or with the company.  My post the other day on Fistful talked about the employee's responsibility – does the word participation communicate that better?

Kicking it up a notch – should we call it "Company Participation" – that way we also communicate it's not a one-sided, employee thing but that every one is involved.

What do you think- Engage or Participate?

Please participate in the comments – I’m not up for a big engagement.