Some of you know I’m a big hoops fan.  I appreciate the game for the fast-pace, skill, diversity and excitement that accompanies most every event.  I grew up playing basketball and it just so happens that my high school coach also coached Brittney Griner, the 6’8″ phenom who is now a freshman at Baylor University. 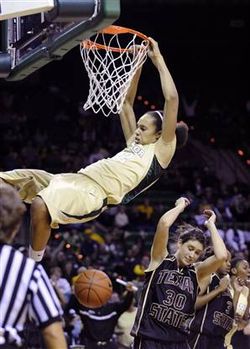 Brittney has made national news in the past as she is one of two women to ever dunk more than once in a game and she is an outstanding overall player.  Unfortunately, she made national news once again….this time for being one of the only women to throw a roundhouse Mike Tyson worthy punch breaking the nose of an opponent after an incident.  Ouch.

Brittney has been suspended for two games and publicly apologized to the player, the two universities, her coach, teammates and the fans:

“I let my emotions get the best of me and I am deeply sorry for my actions.  I am committed to doing a better job of maintaining my composure in the future,” she said.  “I will grow from this and I am dedicated to setting an example to others of how to learn from personal mistakes.”

Even though this is the first time Brittney has lost her cool, there is still a bit of chatter around whether the suspension is enough, as well as if the other player should have been suspended for her actions leading up to the punch.  There is also talk about the refs and if universally they (the refs) believe the “bigger” players (i.e. Shaq, Karl Malone, Yao Ming) are expected to be able to take the abuse from smaller players because of their size.

Hmmm?  How does this play out in corporate life where the game is just as fast-paced, there are varying skill levels, diversity, challenges and disagreements that can turn the average Joe into the Incredible Hulk? I know I’ve witnessed some knockdown, drag-out arguments where I was bracing for the worst. I’ve seen fist-pounding, people storming out of rooms throwing F-bombs and aggressive emails.

I’m a big believer in holding people accountable for their actions – as well as their behavior.  We don’t necessarily suspend executives or employees when they take part in behavior unbecoming of their roles, but hopefully a discussion is had or a performance attribute is dinged.  I’ve also had fights, guns pulled and threats made that have led to suspensions and then terminations.  Looking at the frequency of past questionable behavior and an employee’s track record is key.  Lastly, consistency is paramount in how all these situations are handled.

So, was the NCAA consistent in the punishment of Brittney Griner?  Did Baylor respond accordingly knowing Brittney’s past behavior?  I actually think so. Brittney had never shown unacceptable aggression or poor judgment previously, and I doubt she’ll ever raise her fist to strike someone again. Should the other player have been punished…well, my guess is a broken nose will cause her to rethink her actions the next time she is on the court just as much as if she’d sat out a game or two.  Not saying it’s right, just saying.