“Migrating Talent” is one of those phrases that non-HR folks think sounds exactly like an HR term.  It sounds like an HR “deal,” not a business process that can create a competitive advantage.  But migrating talent isn’t about relocation. It’s being able to intelligently deploy talent throughout the business. 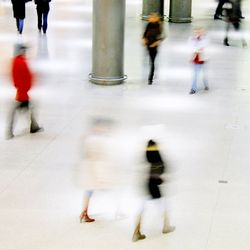 Some companies, like GE and Pepsi, have a reputation for being good at moving people around their business to get the right people in the right roles and accelerate the development of their key people.  They use a good understanding of internal talent supply and demand, combined with a migration process, to make the business run better.  But most companies? They’re horrible at it.

When you rely heavily on operations broken down at the regional or divisional level, you find companies hoarding talent.  It’s as simple as that.  Most executive compensation packages are based on business unit or divisional profit, and so when your bonus rides on hitting a number, helping out another executive by giving her your rising star takes some guts.  Or some stupidity.

And as a result? Employees and the overall company suffer.

Picture this – if Tim is a rising star in a small division, he will be limited to projects in that division, and his development will be stifled by chance.  If another division has a great project that needs some serious help, Tim’s division leader will likely offer up a B or C player, let’s call him Rob, long before he offers up Tim.  And not only will the manager offer Rob up, he’ll offer to drive him to the new division just to get rid of him.  Tim, by the way, never hears of the new cool project that would greatly accelerate his career.  But it’s not that his manager is trying to slowly kill him; he just does not want to lose him.  Great companies spend time getting their best people moved around the business, not their average ones.

Put another way, when the call comes from the New York Yankees to the Scranton-Wilkes-Barre Yankees that the big club needs a catcher for The Show, do you imagine that the minor league manager offers up a guy hitting .153 who’s on their version of a performance improvement plan?

So what’s an organization to do?

Understanding the supply of talent you have is the first step.  Find the top players across the organization, even if that well-intentioned manager in Boise Idaho is hiding 1 or 2.  Then, look at demand.  Find the developmental opportunities that are out there. Develop a system that communicates internal supply and internal demand in a comprehensive and timely way.

But that’s the easy part, of course.  The kicker is designing an incentive program that motivates leaders to share talent for the good of the company – tricky, and something that is going to be different for every organization. For smaller straight line-managed companies, it might just mean the leader picks and plucks people. For decentralized matrix organizations, though, there are plenty of moving parts, so companies have developed multiple ways to try to accomplish the goal, with varying levels of success.

Some organizations split bonus metrics for executives, with one portion of bonus target based on divisional profit and the other portion based on company-wide success.  The thinking is that this will incentivize folks to look at the good of the company in addition to individual divisions.  Other companies will track, recognize and reward those divisional leaders who develop and share talent across the organization.  Like any well-designed compensation plan, the key is identifying what behavior you want to encourage and then building a system of rewards that supports those behaviors.  Company structure, culture and market needs will all play a part.

If we want more of our developing talent to make it to The Show, I think we should be spending time figuring it out.