I’m on my soap box today because… well, because I can here on Fistful of Talent.

I live and work in our nation’s capital. And I’ve kept my eye on what’s happening in DC’s school system with great interest because the plight of DC’s kids has seemingly boiled down to a nasty fight between… labor and management. Nice, right? So much for… how does that song go? I believe the children are our future… teach them well and let them lead the way… 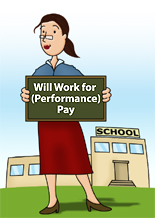 But this week, this week something really interesting happened. After two years of contract negotiations, DC schools and the Washington Teachers Union reached a tentative landmark agreement, that according to the Washington Post includes a voluntary pay-for-performance program that will allow teachers to earn annual bonuses for student growth on standardized tests and other measures of academic success. Says the Post, it also calls for dramatically expanded professional development opportunities for teachers – including school-based professional development centers – and mentoring and induction programs for new educators.

Can you imagine? Accessible professional development for teachers to help them be more successful… and for the highly successful, the potential to earn up to $147,000 per year! Teachers earning six figures for the good work they do. Finally. More from the WSJ:

“We’re really talking about being able to offer salaries that would compel people to become a teacher because they know they’re going to be compensated at the right level,” Ms. Rhee said.

She added that the new contract also gets rid of “ridiculous hurdles” to removing teachers who are not producing results. “If you are rated ineffective at the end of the year, you are terminated from the system,” she said.

Friends. Romans. Countrymen. Lend me your ears so that I might say… this is the way it should be. And lend me your ears so that I might also say… it shouldn’t have taken two years of constant fighting and messy politics played out quite publicly to negotiate a labor contract that would allow for a more effective system that aims to simply and properly reward stellar performance. Yeah. I’ve got a lot of beef with the fact that implementing the changes that DC’s Chancellor Rhee wanted to boiled down to a labor versus management issue.

My second and third HR jobs (when I was 12, and 14 respectively… ha!) were in the public sector – working for the University of Washington, a state school, and the City of Seattle. And both were really cool experiences. Imagine recruiting and shaping employee programs for your alma mater, and then imagine doing the same for the city you loved and were a resident of. The public service side of me thought both were noble pursuits.

So, yes, I was a gov employee. But I’m sure as you can imagine, I wasn’t and still am not your stereotypical gov “personnel” employee. But I paid my dues and did those stints out of a call for service and to also learn the ropes of doing HR in a unionized environment because I just really felt like I needed to know what that life was like… so as to know that I never want to go back to doing HR in a unionized environment, to shape my perspectives on the lack of value of unions, and to solidify my belief that great HR and the influence of great HR on an organization’s leadership replaces the need for employees to feel that their voice can be heard through organizing efforts. And what has happened in DC only reaffirms those beliefs.

Hurray for your nation’s capital for getting to this landmark place of being able to pay teachers what they are worth – but boo on a two-year contract negotiation being the reason for dragging out something that was so very, very long overdue.