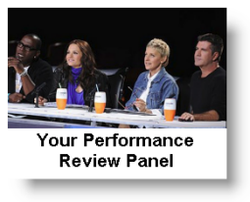 American Idol is an interesting little program.  And an interesting study in performance evaluation.Each week, as contestants perform their hearts out in hopes of earning viewer votes, four judges wait to rip apart provide input on the contestants’ efforts.  It’s a rather humbling experience for many.

But the real study for me as a performance professional is what I’ve dubbed the Cowell Corollary.

The value and the importance of the negative review provided by Simon Cowell increases relative to the few number of previous positive reviews offered by Cowell and the total number of average reviews by the other judges.

The Corollary In Action.  How it looks…

Performer does song, finishes and waits for reviews.  Starting with Randy and working their way through Ellen, Kara and then Simon, we can usually see something like this…

Ellen:  “I do like the shoes.  I almost bought them once, but then I saw them on someone else.  I love you and think you should be the winner but tonight it was like what Randy said… just okay. Not your best but then again – I’m a comedienne, so what do I know.”

Kara:   “Wow.  Just wow.  You know I like you right?  I think you connected with the audience on that one – I think you made it your own and that is what separates the winners from the non-winners.  I think you need to work on your range a bit – that song stretched you a bit so I’d try something different.  Not the best song choice but okay.”

Now… before we get to Simon Cowell’s review there is a noticeable pause in the action.

The audience goes quiet.  You can see there is a physical change in everyone in the theater. They lean forward a bit more to listen more intently.  They shush those sitting around them. They wait for the Cowell to speak.  And just before he opens his mouth… the boo’s start. They don’t even know what he’s going to say but they can’t wait to disagree.  The chances he will come up with something that is A. Funny,  B. Mean  C. Insightful and D. All of the above; is better than 50/50 (closer to 90/10.)

Back to the action…

Simon Cowell:  “Well, I did like the ending.  Not the notes you hit at the end – just the fact that it ended.  That was good.  Probably the best from you tonight was when you stopped. Look, I’m not trying to be mean but, don’t think you picked the right song, Ellen’s right, the shoes are ridiculous and what’s with the white v-neck t-shirt – that’s my look and I’ve trademarked it.  So not only did you sing like my English bulldog, you’re going to get a call from my lawyer.  Not a good night for you I’m afraid.”

Too Much and Too Soft

What’s up with that?

Not Your Normal Best Practice

Most recognition professionals and best practices tell you to recognize often, specifically and sincerely.  But it would seem from the Idol vignettes we get every week this would devalue the recognition.  It seems to me that the contestants value the limited praise from Simon BECA– USE of the very negative input he provides more often.

Do you agree – stingy good reviews sprinkled on a ton of negative mean more than a plethora of good reviews?If there is no negative, is there a positive or does it all end up being so average as to not matter? What say you?