I get calls all the time from executive level candidates we place who are thrilled to have a new place to hang their hat. Life is good! Everything seems to be going as planned and the enthusiasm meter from their voice usually tells the story. Somebody gave them a jump-start and they are off and running! Starting a new gig is already a bit nerve-racking as new recruits engage in their new role, meeting strangers/co-workers, learning the company culture while establishing goals and expectations to measure how well they can perform. With a clearly defined on-boarding road-map employees have a sense of purpose and a yardstick by which they can measure their progress. Seems fair – right? 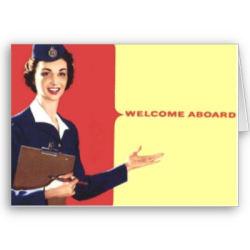 Unfortunately, I also get calls from some candidates who have a different story. They usually find a way to engage in their new gig – but without any road-map (NONE – NA-DA) from their new boss. There is no formal plan and no way to measure early success. So…unless the new hire is an inquisitive, highly motivated, self-starter, they run the risk of floundering for weeks before getting any real traction, and soon they become frustrated. This creates a total waste of time for the new employee, lost productivity for the company, and sends a loud message that there could be a clear and present danger ahead in this new gig. This total disregard for having a meaningful onboarding plan sets the bar for how the new employee views his/her experience for a very long time. Talk about letting the air out of their celebratory balloon…

This scenario makes no sense to me at all. Nope. I don’t get it.

Last year I wrote a story about the best on-boarding memory of my entire career. I was hired as VP of Sales for ActaMed (which later became Healtheon which eventually merged with WebMD) at the height of the dot-com era. The onboarding process was simply spectacular – and it did not matter if you were an executive or the receptionist. Everyone had the same exact on-boarding experience. Many might think that just because you are an executive that you will figure things out faster and on-boarding is not required. I disagree. I hit the ground running at this company faster than anywhere else I worked in my entire career. Onboarding for every employee mattered at this company – and I’m thankful they paid attention to every little detail. To this day, I give all of the credit to my boss (Nancy) who was responsible for the way all new employees were integrated into the ActaMed culture. And it wasn’t just my opinion. I recently attended a reunion at the 2010 HIMSS Conference with many of my former co-workers from the same company. We talked openly about how great the onboarding experience was. It really set the tone for our experience and made a life-long impression on me.

Some companies define onboarding much differently than others. With the cost of human capital to a company’s bottom line, much more attention needs to be paid in developing a comprehensive, well defined on-boarding plan. Period. It could make a huge difference in the overall performance of all employees of the company and increase the pride and enthusiasm workers have about their employer throughout their tenure. When coupled with a well defined retention strategy, organizations have a chance to greatly reduce turn-over.

While some may argue that on-boarding and retention are mutually exclusive initiatives – I believe there is much more linkage than you think. I’m just saying….