There has been so much media attention around Tiger coming back to professional golf to play in the Master’s this week.  Most of the attention is on whether or not his wife will be there, how Tiger will handle the pressure of media crush, or what the reaction from the fans will be like…  What I have found most interesting though was a small article from Comcast Sports, Finding the 2 Players in Tiger’s group at Augusta that delved into those other professional golfers who must now play side-by-side with Tiger in his first tournament since his scandal. From the article:

How will they decide who plays with Woods?

“With great care,” said Colin Montgomerie, who is not eligible for the Masters this year. “You’d almost have to ask for volunteers. There’s a number of players that will be looking at the draw sheet – I believe it comes out on Tuesday afternoon – and will be delighted if they are not playing with Tiger on this occasion.”

So who gets him? Perhaps the better question is who wants him? 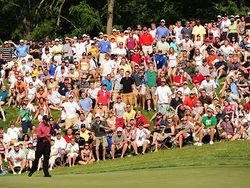 “I would say it would be a tough pairing, to tell you the truth,” said 49-year-old Kenny Perry, who lost in a playoff last year. “I’m old enough to maybe handle that. Maybe you need some hillbilly like me to do that. But it will be different, because I’m sure the players will be focused on Augusta, yet focused on what’s going on with him and paying attention to what he’s doing out there.”

This begs an interesting question: Would You Want to Work side-by-side with a Tiger Woods?  Not the Tiger Woods you loved 6 months ago and would have paid big to play a round of golf with, but the Tiger Woods right now in all of this glory misery.  I personally know guys who have waited hours standing around a golf green at a tournament just to get a chance to see Tiger take a putt.  But now they would be ridiculed to do the same thing.  Did Tiger get worse at golf?  Did grown men really view Tiger as their hero?

I personally like American sports heroes best when they are down – after testing positive for drugs, on the way to jail after being arrested for hitting their spouse, after being pulled over with 400 pounds of pot in the trunk of their car.  This is when we really get to see our heroes in real life – the ESPN interview and Barbara Walters specials don’t tell us anything we didn’t know – I want to know the athlete when they’re face down on the hood of the car getting cuffed, or ducking to miss getting hit by his wife swinging a 7-iron at his head. That’s real life – and that’s the Tiger I want to know.

And what about in your work environment?  It’s happened – Ted in Accounting has an affair with Mary in Marketing, and can you believe it – Ted’s wife was pregnant at the time, and Mary’s son is disabled – and how could they do this!?!?  Organizationally, Ted is a superstar and Mary has 2-times next level potential and pedigree – they’re in their own right, bonafide company rock stars.  Two consenting adults, didn’t work in the same department, wasn’t a supervisory relationship, really had nothing to do with business – except it has everything to do with business now – because everyone knows and no one wants to work or interact with either of them.

So, what’s a HR pro to do? Unfortunately, it’s sticky, but it’s also too common in our organizations.  If it’s not infidelity, it’s DUI’s, or bankruptcy, or other domestic issues, and HR is the one that has to get everyone to play well with each other the day after.  These are the challenging moments that will test your resolve and many times your character and values as a HR Pro.  There is no perfect answer on how to handle these issues because each one is issue specific, organizational specific and talent specific (don’t kid yourself – it’s much harder to cut a rock star than a bottom-feeder – and I’ll bet if you can say you would treat everyone the same – you haven’t faced this type of issue yet – because Executives don’t view all your employees the same!).

Regardless of how you solve this issue – promise me one thing – don’t take the easy way out and hand them the EAP card!   Your organization expects more than that.