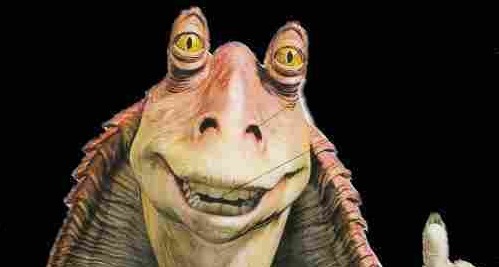 If you are old enough to have seen the original in the series, ‘Star Wars’, in an actual theater, I’d be willing to bet that film, or one of the other ‘older’ films ‘The Empire Strikes Back’ or ‘Return of the Jedi’ is the one you would choose as your favorite.

In the world of ‘Star Wars’ movies – most of us adults think older is better. I asked my 9 year old, a major Star Wars fan, which movie was his favorite, and without hesitation he replied, ‘The Phantom Menace’, the 1999 film that re-launched the Star Wars movie franchise after a sixteen-year break.  When it was released ‘The Phantom Menace’ was widely panned, long-time fans of the series tended to hate it, and one of the primary characters, Jar-Jar Binks was seen at best as annoying, and at worst racially insensitive. ‘Serious’ fans derided the movie and wondered why it was even made, when the older films were clearly superior and accused creator George Lucas with ‘ruining’ his own creation.

But was the original film really superior?

Think about the the primary actors (Mark Hamill in the original film vs Ewan McGregor and Liam Neeson in the new film), the technology, the special effects, the sound and picture quality, the incredible advances in almost every aspect of film production in the ensuing sixteen years.  A disinterested observer would probably conclude that everything was better about the newer film.  Except that for us ‘old’ fans, in our minds, our expectations were higher.  The older movies, first experienced when we were kids, have the advantage of holding the incumbent position in our consciousness.  They have become entrenched as what ‘Star Wars’ means.

For us older fans, the Phantom Menace did not need to merely be slightly better than ‘Star Wars’, it needed to be wildly, remarkably, fantastically better in order for us to change our opinions. And despite all the new technology, the better production qualities, and excellent cast of actors, almost no one who was a fan of the older movies has switched allegiances to the newer films.

This phenomenon also applies to how we view and assess new processes, disruptive technologies, and innovations in the workplace.  Harvard Business School marketing professor, John Gourville, describes this circumstance in the following manner: ‘People irrationally overvalue benefits they currently possess relative to those that don’t’. The idea that what you have, and the value of incumbency, is manifested in politics, (we hate Congress, but keep re-electing our own Representatives), sports (we will continue to support the same teams forever), and technology (how many of you are still using your @AOL.com email addresses?).

In fact, Gourville’s theory that ‘what you have’ is in your perception so great and valuable relative to a new or competing alternative that the new product/service/process has to be 9 times better than the incumbent option in order to motivate people to change behavior or adopt a new product or technology.  Why 9 times? Because the people pitching the change overvalue their great new idea by a factor of three, while at the same time, the people clinging to the status quo will undervalue the benefits of the proposed change, also by a factor of three.

So, keep this in mind when you are pitching a new technology (hey guys let’s quit e-mailing each other and post all the project notes on a wiki), process (let’s scrap annual performance reviews and just have managers and employees ‘check-in’ each week), or strategy (let’s cancel the Monster.com contract and just post our open jobs on Facebook and Twitter).

No matter how fantastic your new idea is, and how enthusiastic and excited you feel about it, the chances are you are overestimating its value and potential, and underestimating the level of resistance to change you are likely to encounter.

Remember, to the people that you have to convince to come around to your great ideas, no matter how clever, insightful, or revolutionary they may be, many of them will just see Jar-Jar Binks.  And he kind of sucked. By at least a factor of three.