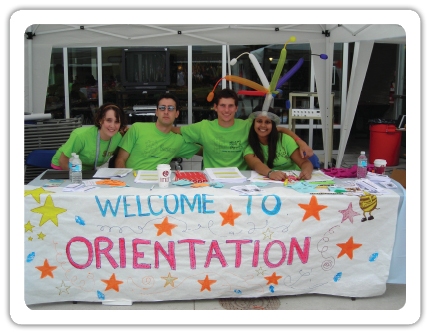 Monday mornings you’ll typically find me spending the first few hours of my day with new hires. Sure, I’m usually a little bleary eyed for the first 15 minutes of any Monday… no one likes saying goodbye to the weekend. But I perk up pretty quickly and get into a good mood because of these new hires. And how could I not? They’re always so excited. So enthusiastic. So optimistic. And they’re eager to make their mark. They’re rejuvenated about this fresh start. They’re raring to go. It’s all a bit infectious.

Orientation and onboarding (call it what you like, it’s semantics, I think) is something we’ve always grappled with how to do better though. Regardless of the company I’ve been with, I’m not sure I’ve ever seen or figured out the right balance of how not to overwhelm but how to engage just enough, or how to onboard senior executives versus fresh college grads, or how to make sure we have a program in place that provides enough structure and support but also makes managers take ownership and be accountable for welcoming a new team member and getting them up and running. There always seems to be something to re-tinker and re-jigger to make the onboarding experience of new hires a bit better. (Rebrand, reorder the day’s activities, more materials, less materials, and on and on and on…)

One area in particular related to onboarding that I’ve always wondered how to better capitalize on is the energy that new hires bring to the table. They’re always so bright eyed and bushy tailed. And that’s catching, right? It’s one of the very reasons why I never mind spending my Monday mornings with new folks. For me, it’s like a weekly pep talk to get you going for the rest of the week. It’s hard to be jaded and cynical when you’re around that. So if you could only bottle that energy up and spread the love. Or maybe you can…

I had the opportunity to observe something pretty cool over the past few weeks with someone who started a new job. FOT buddy, Chris Hoyt, also known to some as The Recruiter Guy, took a new gig with PepsiCo as a talent engagement and marketing leader. Congrads, well deserved, and all that jazz. (Love ya, Chris!) Backslaps and high fives isn’t what this post is about though. As he started in this new gig, I was a little enamored with everything he was putting out there via Twitter and Facebook about the onboarding experience.

More and more tweets followed. He then chronicled day two. Then he chronicled week two including an internal leadership summit he was sent to where he got to shake the hand of PepsiCo CEO, Indra Nooyi, along with all the other new hires. And of course, he also decided to capture his first 30 days at PepsiCo and the onboarding experience via a Facebook photo album. I’ve been able to catch bits and pieces of his experience as a new hire and cumulatively, it’s given me a really great glimpse into what the PepsiCo onboarding experience is. More importantly though? I’ve been able to feel his enthusiasm as a new member of their organization. And how cool is that for PepsiCo’s employment brand? I’ve had some of the koolaid to drink too!

Chris was onto something by chronicling his new hire experience via Twitter and Facebook. But what if we could take that one step further in some institutionalized fashion? I did a quick search on Twitter to find people talking about new jobs, or their first day in a new job. Interestingly, most of these folks don’t mention the company they are now working for in each individual Tweet. But what if they were encouraged to – by you? Think about it. What if Chris Hoyt, as an example, were to mark everything using a #PepsiCoOnboarding hashtag via Twitter just in case someone random comes across his tweets or someone was unaware of his job change? Or what if I were to encourage all of our new hires who use Twitter to use an #APCOnewbie hashtag? How cool of a movement could this create? And what would the potential impact to our respective employment brands be?

Not every culture is right for such a public onboarding experience, I know. But imagine if you found a way to unleash your new hires’ enthusiasm in some similar vein, social media tools optional. Onboarding is never the most glamorous part of HR. It’s hard to make forms, policies, security badges and some of the very nitty gritty details sexy – but your new hires are excited nonetheless, and that excitement is contagious. You want it to spread. It’s just a question of how.

So homework assignment for novices – re-examine your onboarding to make sure you’d feel comfortable with new hires publicly talking about it. You’ve got to get the baseline intact first. You want to spread only the good, not a virus, and not an infection. And pros? If you’ve figured out a successful onboarding program? Time to figure out how to bottle up that new hire excitement and leverage it for your employment brand. And don’t be afraid to see how social media might factor into it all.

Me? Time to go brainstorm with my manager how to bottle it all up.