My most popular rants these days all center around Social Meida in the
workplace. If you’re a company who is blocking websites at work and
banning employees from being proactive on the web, you’re probably the
target of my rage. If you’re doing either of these things you are
desperately grasping to keep complete control in a way that’s just not
possible. Face it. The internet is here and your employees are on it.
It’s your choice to either be one of the companies who uses this to your
advantage or one of the companies who wastes time fighting a losing
battle to have complete control. 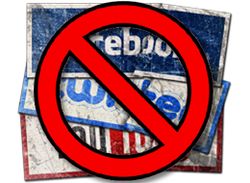 Quick Story: A friend of mine had spent years building his reputation as
an industry expert in his field. Because of his hard work and
dedication he’d been asked to write on several industry blogs. Each of
his blogs were about general topics in his field, his theories on those
topics, and advice for others interested in the same things. He never
mentioned his company or issues they were facing, competitors, or
anything at all related to work that he was doing at his company. Yet in
his bio he mentioned his title and where he worked. The more he wrote
the more followers he had and the more followers he had the more of a
buzz he created as being an industry expert. Yet every time he posted he
received a letter from his the Corporate Communications team at his
company letting him know it was inappropriate for him to use the
company’s name in his bio and that he was not allowed to write on behalf
of the company.

Because they were too foolish to realize that when the outside world
sees your employees as industry leaders they also see your company as
cutting edge, they tried to control what was being put out there.
Because he was a smart, driven, motivated employee he took the hint and
found another job. His former company regained control and in the
process lost an employee. But did they win?

Here’s my point: Embrace the internet because it’s not going away. Focus
on minimizing the stupid things your employees can do on the web that
could hurt your company and embrace the smart things they’re doing. It’s
not about control, it’s about knowing how to guide employees in the
right direction. Tell them what’s okay and what isn’t. Set clear
guidelines about your expectations.

The web is a scary place for companies – especially when our employees
have free reign. I get it, but the best companies are pushing forward
and figuring out ways to embrace it. Take a look at this oldie but goody
on Zappo’s.

How do you feel about embracing your employees use of social media?