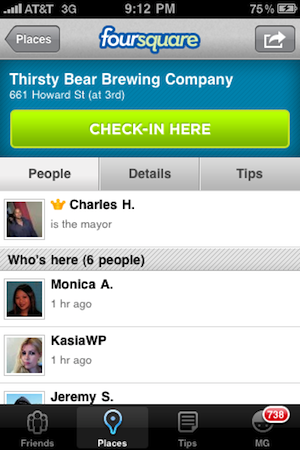 Sometimes Social Media creeps me out. Yep, even me. How so?  Well, sometimes I just wonder how much darn information you really want to know about me. I mean, do you really want to know every single place I go on a daily basis?  That’s exactly what these new geo-location sites are capturing though. Foursquare, Gowalla, and more. In some ways, they remind me of the early days of Twitter… when quite often you’d find people talking about their lunch selection, their petty gripes and groans. Pretty lame interaction, but a starting point. So the thought that these geo-location programs are a starting point got me to try foursquare.  TMI be damned, I went ahead and downloaded it to my Blackberry…  I’d seen lots of people playing around with it and wanted to see what it was all about.

For the fans of geo-location and the marketing potential that concept brings… it looks to be amazing. You can network with people you don’t know yet, make connections, etc.  You can go ahead and strike up random conversations with strangers if that works for you. (Do you see what I mean about a creepiness factor coming in?)  I can see it maybe coming into play at hiring events, job fairs, conferences, that sort of thing.  You don’t always know that you have a shared interest with another user on the site except for the fact that you are visiting the same destinations.  And, in keeping with the gaming spirit, foursquare awards points and you are able to, after a certain number of points and visits, become mayor of a venue. (Seriously competitive at heart, I am intent on becoming the mayor of my local DunkinDonuts.) And much like a passport, I also think it would be kind of fun to collect airports like stamps of sorts. If you stalk me on foursquare, you’ll begin to see I’m working on both of those.

Foursquare became a bit more event surreal as I traveled from Maryland to Wisconsin a while back to see people drop me messages along the lines of, “You’re in town?”  That didn’t bother me so much, because the people who reached out, I’ve known online for a while. But I’m not sure if I would’ve felt the same if it had been complete strangers.  So far I’ve sort of instituted my own best practices and restricted the majority of my foursquare documenting to work related events.  A lot of my personal travels involve my kids and I don’t know that I’m willing to surrender all of that information.

So okay, I’m having fun, I’m connecting with my Twitter friends when they see I’ve visited near them (hopefully one day I get to have one of those cups of coffee proferred!) But bottom line, creepiness aside, can I use this as a resource from a recruiting perspective?

I say yes. But… I will also say you’re not going to have a golden candidate float into your hands.  It’s a site where you’re going to have to work to find that talent. It’s a place for generating leads. Here’s what I think you can try:

For example, via Google I ran this search looking for Microsoft employees:

One of my first results was for a foursquare user who was “mayor” of several of the Microsoft buildings in Redmond, Washington.  And, what was really amazing to see were all of the additional employees connected to those locations.

It’s also worth noting that quite often foursquare users link their profile to their other social media sites, like Twitter and Facebook.  Which means you can often get additional, more robust information.  Keep that in mind and create more complex search strings using Yahoo to take advantage of XRay and FlipSearch to uncover the candidates you seek.