I like this show a lot, and I'm really happy to be presenting.  I've attended, and it was really worth it – something I don't say about a lot of shows.  The best way I can describe the show to you is that it's really a talent conference, with the 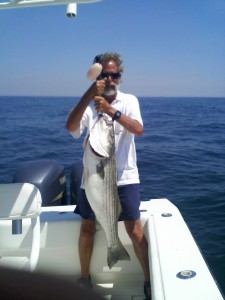 conversations about talent centered around how technology enables you to maximize the talent in your organization.  Pretty cool stuff.  Among many things that make the conference special is that it’s created by experts and delivered by executives: 54 of the 66 presenters this year are VPs or higher, including 24 CEOs.

In addition to being exposed to some of the best content you'll find on the conference circuit, you also have a chance to say hi to Bill Kutik, who runs this shindig and is widely considered to be the leading independent analyst of the HR technology marketplace with specialties in HCM, Recruiting, and Talent Management.  If that's not enough, consider for a moment that Bill moonlights as the "most interesting man in the world" featured in those Dos Equis commercials.  Don't believe me?  Take a look at the picture to the side of this post.  That's Bill snagging some big game in the Sea of Cortez.  He calls it the Sea of Cortez because he has a brain the size of a WalMart supercenter.  I had to look it up to figure out he was talking about the Gulf of California.  Sucks to be me.

"He once had an awkward moment, just to see how it feels.

His personality is so magnetic, he is unable to carry credit cards.

He once launched a LinkedIn group, just to prove it could be more effective than a social network.

Look at the video below, then look at the picture above, and tell me that's not Bill Kutik.

Right.  It's Bill… freaking.. Kutik…  The most interesting man in the HR world.

With the economy hurting, the most interesting man in the world understands that it may be a stretch for some to attend, so he's given me a special discount – $500 off – to offer you, which is larger than any advertised discount and is good until the day the conference opens. Your cost would be $1,195 for two-and-a-half days.   That's a lot of money, but I'm a believer in this conference and don't mind pitching you on the value of this one.  It's worth it if you like to think about talent issues and find yourself thinking about how technology can help you on the talent front.

I don't often attend recommend conferences, but when I do, I recommend the HR Technology Conference.

You can take a look at the agenda at www.HRTechnologyConference.com. Then click on "Register" and enter the case sensitive FISTFULOFTALENT10 in the Promotional Code field in the online form to save $500.

Let me know if you have any questions – if you are in Chicago, let's connect!