I got the news this week that ERE was shutting down the Fordyce Letter Network, which was a Ning-style network along the lines of RecruitingBlogs.com and the millions of Ning-powered networks serving every niche imaginable.  The Fordyce Letter is a publication and website that’s designed to serve up timely information to third party recruiters (at least that’s my view), although corporate types like me dig it too because it makes me feel like a player.  It’s an actual publication (thus the term letter, stay with me people), it’s been around 30 years and ERE acquired it a couple of years back.

I’ve always liked the Fordyce Letter and got introduced to it by Harry Joiner, via the Marketing Headhunter, about four years ago.   When ERE acquired it, they quickly put up the Fordyce Letter Network to create some community around the 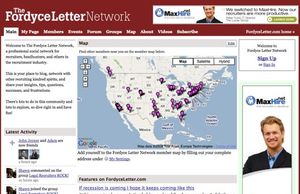 publication.  Ning-powered networks were hot at the time, and it was the obvious/smart thing to do.

So ERE created the Ning network around the Fordyce Letter, and something happened that has happened to millions of Ning-networks everywhere.

Nobody came.  Those that did come didn’t really do much.

It’s not ERE’s fault.  After all, if anyone can make a digital property work, it’s Dave Manaster and the gang at ERE.

The Fordyce Letter Network had a bigger obstacle than creating good content and cool reasons to drop by the site.  They were battling something called social network fatigue.

Social network fatigue is a pretty simple thing.  Back in the day, people joined MySpace and Facebook and life was good.  Then, white label technologies like Ning allowed experts to create social networks in every field of interest.

Consumers of information ate it up.  Damn – I can get a Ning-network of all the people who love the Detroit Pistons nationally?  There’s one to follow Rancid? Where do I sign up?  People were signing up for theme-based and niche social networks everywhere. Power belonged to the people.

Then, people looked up, and suddenly they belonged to 15 social networks. They asked themselves the magic, two Bobs-like question – “what would you say you do here?”.  The answer more often than not was “nothing”.  So they did what any red-blooded American consumer of media would do.  They abandoned every social network they joined, with the exception of Facebook.  And possibly MySpace if they like bad music from bad independent bands.

Which should serve as a cautionary tale for anyone thinking about launching a white label social network to engage candidates or even employees.  If you’re going to attempt that strategy, what makes you different from the millions of orphaned Ning networks out there?  Is it your content? Maybe you have a unique thought about the best placement above the fold for that hot “discussions” feature.  Riiiight….

Good on ERE for hiring former sourcer (Research Goddess to many), Amybeth Hale as editor of the Fordyce Letter which will still live on as a content source that goes out via print as it has for the psat 30 years, and online through their website… as for the Ning based network itself though… well, if ERE can’t make it work, neither can you.  You’re not the next Mark Zuckerberg.  Leave your idea for a new social network on the shelf.

Me? I’ve got this great idea.  I’m going to create a new type of niche community, but you’ll have to get your thought complete in under 140 characters, and…