Look I get it – I’ve had to train in large organizations – you are constantly challenged by teaching to the lowest knowledge level in the room. So, I understand the major hurdles that a large international organization like SHRM goes through in setting up content for their annual conference.  Put on top of that the demographics of their membership, of which I’m one, and they soon become that family restaurant down the street that no one admits they go to, but everyone seems to know the menu – the menu that has 5 pages and serves everything – all of which tastes like it came out of the fryer – even the spaghetti and prime rib and the wet burrito and the stir fry and the pancakes – you get the point.  So, when I was preparing to go to SHRM and deciding on what sessions to attend – my very first impression was “seems like I’ve been here and done this before”  – my next impression was “why does 90% of presenters have either consultant or speaker as their title?”  where have all the real HR Pros gone? 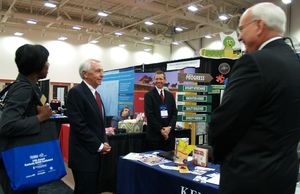 Quick Idea: for all the HR Vendors on how to do the SHRM Expo better next year: 1. Get booth with some comfy chairs/couches and wifi access.  2. Get one of those big frozen margarita machines (it’s Vegas next year – so alcohol is welcome 24/7). 3. Let me come in, sit down, catch up on email and relax.  4. Come over and offer me a drink.  5. Sit down, introduce yourself and let’s talk.  The Expo has gotten so big – I think it can actually suck the life out of you if you stay in there too long.  Be an oasis of calm in a sea of crazy!