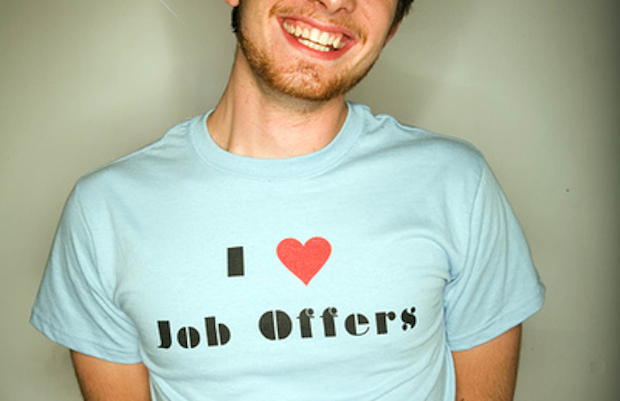 WAIT! Stop the presses. Are y’a’ll really seeing candidates accept job offers for lower salaries? I mean, really? Is it rampant? I really need to know. Because personally, I’m not seeing it.

Maybe it’s because so much of my hiring is based in DC where we have lower unemployment rates, more job openings and on many accounts, we have been shielded by the recession given the government drives much of the local economy – but it’s not that much better here than elsewhere. Not drastically. And I’m not personally seeing a lot of candidates accept job offers for lower salaries. Nevermind the short sightedness of the idea of offering lower salaries to get top notch talent for a good deal – Andy Porter has got you covered on that front with his post… but back to candidates accepting lower salaries – I’m just not seeing it. I truly expected I would see this trend, but I’m not. I am, however, seeing candidates hold out for offers that are more in line with their personal (sometimes inflated) salary expectations, or in line with where they were pre-layoff, anticipating being made whole again, or because they don’t want to take a step back for fear of how it would look on their resume or salary history.

And as analysts continue to, well, analyze the unemployment in the US and joblessness and underemployment – stories are also surfacing of increasing numbers of individuals who are staying unemployed, continuing to receive unemployment benefits, and turning down job offers because the offers aren’t good enough. Eek. Which is why I’m surprised to read about job seekers accepting lower salaries in this Workforce piece.

So, immediately, I think back to a Wall Street Journal article a few weeks back —

With a 9.5% jobless rate and some 15 million Americans looking for work, many employers are inundated with applicants. But a surprising number say they are getting an underwhelming response, and many are having trouble filling open positions… Employers and economists point to several explanations. Extending jobless benefits to 99 weeks gives the unemployed less incentive to search out new work.

And then the troubling anecdotes start pouring out in the article –

Some workers agree that unemployment benefits make them less likely to take whatever job comes along, particularly when those jobs don’t pay much. Michael Hatchell, a 52-year-old mechanic in Lumberton, N.C., says he turned down more than a dozen offers during the 59 weeks he was unemployed, because they didn’t pay more than the $450 a week he was collecting in benefits. One auto-parts store, he says, offered him $7.75 an hour, which amounts to only $310 a week for 40 hours.

“I was not going to put myself in a situation where I was making that small of a wage,” says Mr. Hatchell.

Firstly, in principle, I am troubled with the idea of offering lower salaries just because you can. It’s short sighted as far as talent strategies go – because given the slightest chance of a turnaround and the opportunity to be made whole again from a compensation perspective, I do believe workers will jet. And think about the possible employee relations nightmare you have with recession hires who you got as a steal of a deal working side by side with people who were brought in years earlier in the 75% percentile. No fun.

Which means you have a bit of a problem. A big problem, actually. From my vantage point, I’m not seeing candidates accept lower salaries. And then unemployment remains rampant. Some employers out there want to low ball as a strategy though. Which means something has got to give.

Now, I’m no economist, but it seems like a few things are going to need to happen to fix this picture. Job seeker realities need to be shaken a bit. Stronger enforcement around job offers turned down by individuals receiving unemployment insurance is one thing. More clarity (and maybe transparency) around salaries and market rates is another. (How many times have you heard a candidate or even employee lament about seeing “market data” on the web as justification for receiving a salary increase? Right? Their information source is broken, somewhere.) But another piece of this is that hiring is a two way street. It’s a dance and it’s a negotiation between a job seeker and employer. Both sides have to come to agreement on the position and responsibilities, the pay, the benefits and more. You hear that? Just because you have the job to offer, and they don’t, doesn’t automatically put you in the driver’s seat and in control of the situation. Even a capitalist like me believes that.

It’s a two way street. And it takes two to tango. Or if you’d like, there’s no I in “team.” You pick the phrase you fancy most – but it’s a give and take folks.