Today’s post is going to take on a more serious, impactful tone – my hope is that it touches the reader as much as it touched me to write it.

As of early 2008, our number of Disabled Veterans had jumped over 25%, to 2.9 Million in total.  As of today, I can find no data (2010) on a further increase, but we can all agree that the number is larger.  Our military campaigns in Iraq and Afghanistan have accompanied significant enhancements in medical technology, in addition to the implementation of the “Golden Hour”, whereby the goal is to medically evacuate (medevac) the wounded Veteran to a field-hospital within a 1-hour window.  The result?  Wounds that would have killed Veterans in the Vietnam War (and earlier) are now successfully treated.  Lives are being saved. 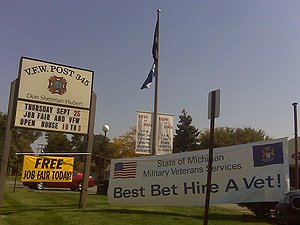 Good news, right?  Perhaps, but to answer with a blanket statement would prove to be uninformed.  Our suicide rate among young Veterans (those 18 to 29 years old who have served) increased 26% from 2005 to 2007.  Earlier this year, VA Secretary Eric Shinseki stated that of our (approximately) 30,000 suicides in the U.S., 20% are committed by Veterans.  Yeah, let that one sink in for a minute: 1 in 5 of our current annual suicides are being committed by those who have served our country.  Further, the unemployment rate of Veterans has been 30% higher than the general population.  Oh, and if that doesn’t blow you away, how about the fact that the unemployment rate among Female Veterans has increased by more than 60% from last year alone?  Let’s not even get into what PTSD is all about, or the fact that the VA
estimates approximately 6 out of 10 Veterans who have served in a combat
zone return with some form of it.  Who would want to disclose that
disease (along with all the civilian misconceptions about it) on an
employment application?  You get the picture.

While the statistics laid out in the above paragraph don’t extract out the number of Disabled Veterans that fall into each category, I believe the numbers would be worse.  Don’t believe me?  Take a stroll through your local VA Hospital if you’d like to form your own assessment.

So, here’s where I’m going with this: I think it’s outstanding that Employers are building “military talent communities” and creating their own military-focused websites.  They’re fantastic, albeit with one caveat: the majority of jobs listed advertised within them are “skilled” positions.  Competition for these “skilled” Veterans is fierce – they’re getting a job either way.  That’s right – if all we’re doing is competing for the same “skilled” military talent, we’re not making a dent in the problem.  Sure, it’s a nice PR bump, but in reality, it’s window dressing.

While I greatly respect those Veterans who were not “Combat-Arms” focused, they’re not the individuals most susceptible to losing limbs or their sight, etc.  That’s not said to discount the importance of Combat Support by any means, because supporting the actual WarFighter is absolutely necessary.  But what I am suggesting is this: It’s not the “skilled” guy (or girl) typing on a keyboard back in the air-controlled, “Green Zone”, Command-and-Control tent that gets rocked by an IED.  It’s the Marine on patrol in the Sunni Triangle of Iraq.  It’s the Soldier “winning the hearts and minds” of the Afghani population in the Korengal Valley of Aghanistan.  Again, you get the picture. 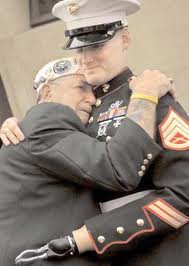 So, am I biased?  You bet.  See, when I volunteer at the Atlanta VA Regional Hospital, I don’t work with Veterans who are “skilled.”  Why?  Not because I wouldn’t, but because they don’t ask me to.  They’re being competed for; they’re “good to go.”  I find myself working with the people who are missing legs and arms (sometimes both), most of whom can’t get an interview with a local Piggly Wiggly because they’re not “skilled” enough.  Nope, they’re the guys and girls that bought into the Military Recruiting vision – they wanted to “fight the bad guys” (or “fight for their country”), not knowing what the long-term costs of such a sacrifice might be.  Yeah, yeah, the “We Thank Our Troops” bumper stickers are nice, but they don’t help anyone get a job.  In a sense, these Disabled Veterans are “Not Gone, But Forgotten.”

And if you want the truth, most severely Disabled Veterans aren’t looking for help with a resume, or a call to a local organization that they respect.  Nope, they’re looking for a boost to their confidence; something to believe in again; something to strive for and get them up out of bed in the morning.

The job that you’re currently recruiting for might just be it.

If this post moves you in any way, it has done its job.  My only request for you is this: Understand that “skilled” Military Veterans are heavily competed for.  It’s not the “skilled” who really need and could use your help.  If you want to make a difference, dedicate some time to helping a Disabled Veteran or an “unskilled” Vet who actually spent his or her time fighting and didn’t have the opportunity to build up their slate of ‘transferable skills’.  It won’t be an easy feat, but it will be a real accomplishment that you can be proud of.  Further, you’ll have made a real dent in Veteran unemployment, not to mention touched yet another life in an extremely positive way.