You know how you thought, “I am going to regret this in the morning,” just before eating your 20th chicken wing covered in Super Atomic Hot Sauce?

Remember how you wondered, “Will I ever date another girl?” just before getting your girlfriend’s name permanently tattooed on your chest? 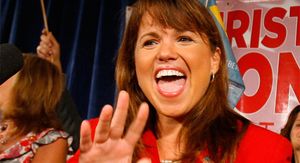 And then there was that time you pondered, “Will I ever run for Senate?” before telling the world that you dabbled in witchcraft and once had a date that involved an altar covered in blood?

Oh…not that one?  Sorry, that must be someone else.

In the age of social media and blogging, it’s important to remember this.  There is constant debate about what companies and their recruiters can and should look at prior to hiring a candidate.  Is it appropriate to Google a candidate (or, even better, Bing them)?  Should you look them up on Facebook or MySpace?  At the recent #SocialRecruiting Summit, Richard Cho, Staffing Manager at Facebook said that everything on Facebook is personal and should be thought of as so.  In other words, if I am a speech writer for the future President of the United States, I shouldn’t need to think twice about a little picture someone took of me and a carboard cutout of Hilary Clinton .

I frequently run a search on candidates I am talking to.  If I can view their Facebook or MySpace pages, I do.  Is this so I can spy on them and find some way to knock them out of the running?  Of course not… my job is to hire people, not sabotage them.  It’s so that I can learn about them and potential things that I can use to sell them on a job.  But… if I see a status update of, “I’m interviewing with those stupid doo-doo heads at *insert company of stupid doo-doo heads here*,” I may bring it up in our next conversation.  But… I’m a nice, and fairly non-judgmental guy.  Others may not like the picture of you and your roommate lighting up at the Grateful Dead concert.  Some may take issue with highlights from your bachelor party.

Back in the 90’s (or was it 80s? Can’t tell by that hair), maybe Christine O’Donnell didn’t realize she would be running for Senate and having all of her stupid comments analyzed and thrown back in her face.  But… she should have thought about the fact that everything she was saying, in public, was being recorded for posterity.  Everything she was saying was going to be permanently saved in somebody’s archives for people to look at and criticize later.

Perhaps now, you are jumping over to your blog to remove any disparaging things you may have said.  Maybe you said that Dinosaur bones are actually a prank God is playing on us to test our faith.  Or, maybe you once Tweeted that Josh Letourneau should pose topless in a calendar (HA! Wouldn’t that be great?!).  Well… unfortunately, thanks to tools like the Wayback Machine, it’s too late.  It’s already etched into internet history.  The smartest thing to do is simply know when to shut up. And fellow recruiters, continue Binging (okay, fine, continue Googling) to learn more about your candidates.

At least we know we can count on Delaware for some entertaining speakers.