I was a poli sci major. It was going to be poli sci or journalism for me. I was obsessed with the news. Even as hungover, I mean as sleepy as I might be, I would religiously watch Meet the Press on Sunday mornings in high school. I just knew I would end up studying politics or media. And so I did. But I happened to begin working in HR while in college – which made me switch gears a bit and study labor intensively as part of my major. 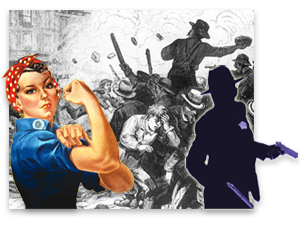 Somehow, I’ve found myself as a blogger, in DC, working for an org that’s fairly political… which makes sense for my interests. But as for that time spent studying labor? At the time, it made me become more and more interested in unions… and eventually drove me to do a few stints in the public sector where I knew I’d gain some experience doing HR in unionized environments. Fast forward to a decade in HR now (I know! It shocks me to even say that!), and I confidently can say… never again. Well, never say never. But it would have to take nearly an act of God for me to go back and do HR in a unionized environment. I just can’t stand the thought. Why, you ask? Because I firmly believe that with a good HR function and great HR leaders and strong organizational leadership who believe in solid people management practices… the need for unions just shouldn’t exist.

With unusual nastiness, the two unions have traded accusations of lying, stealing, fraud and intimidation — not exactly the image the labor movement wants to project as it tries to improve its tattered reputation. In one instance, Mr. Rosselli’s group accused S.E.I.U. activists of threatening some immigrant Kaiser employees with deportation unless they stopped supporting the rival union. Service employee officials say that is a lie concocted by Rosselli partisans with feverish imaginations.

The fratricidal war is a distraction as the November elections approach. The S.E.I.U. has dispatched hundreds of foot soldiers to defeat Mr. Rosselli. Other unions say they wish those activists were campaigning instead to elect union-friendly lawmakers.

Meanwhile, corporate executives can only gloat as they watch the S.E.I.U. — a scourge to many employers because of its aggressive tactics — spend millions of dollars battling not business, but another union. Saying “the S.E.I.U. is putting unimagined resources into this fight,” Mr. Rosselli asserts that his nemesis will spend $40 million on the election; S.E.I.U. officials say they will spend at most one-tenth that amount.

Never mind what the issues may be at the company whose employees they are battling over. Never mind anything about the HR folks there – I don’t know the workforce issues they face, nor do I know the HR folks there. They could be perfectly wonderful, progressive, forward thinking HR pros with great employee programs for all I know. This post isn’t about them though. This post is simply about the fact that these unions are battling one another – energy, resources, dollars diverted from their central mission of, in the case of SEIU at least, being “united by the belief in the dignity and worth of workers and the services they provide and dedicated to improving the lives of workers and their families and creating a more just and humane society…” to fight each other. Each other! That’s where union dues are being funneled? For real?

I recognize that even if SEIU is spending $4 million as they claim, rather than $40 million, it’s a drop in the bucket for them… but if you’ve got an extra $4 million laying around… I’ve got some better ideas for how to spend those dollars in support of improving the lives of workers and their families. And if I were a dues paying member of either union, I’d have to think long and hard as to whether my best interests are really at stake. Way to go, unions… you’re looking real good.