I’ve been on record for many years now saying that job titles don’t really matter all that much. It’s all about the work you’re doing, and we shouldn’t give a crap about what we’re called. And you know what? If you’re spending too much time worrying about your title, you’re probably missing out on all sorts of opportunities that don’t necessarily come with new titles but create important networks that lead to better opportunities down the road. As you can imagine, this sparks all sorts of interesting lunch-time conversations. So recently, my CEO asked me “why is it then that we have titles in the first place?” Good question. 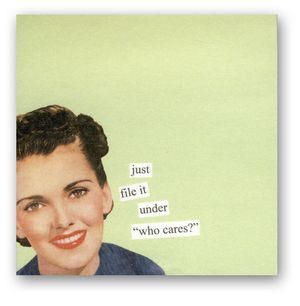 I was all ready to just get rid of titles all together – we could just call ourselves…who knows, people?? But upon further reflection, I recognize that my perspective is probably skewed because I already have my “senior” title. Easy for me to say that they don’t matter I suppose. I recently came across an interesting post on job titles which describes companies with titles like Minister of Comedy and Director of First Impressions. At first I thought this was a little too ’90s era dot com for me. But this particular paragraph really got me thinking:

It’s easy to make fun of these titles, but when we talked to the people who held them, you could feel their sense of ownership of, engagement with, and excitement about their jobs–and the offbeat titles that described their jobs. Their work truly mattered to them, and how their work got described to the world mattered as well.

Hmm. How their work got described mattered. I was right that titles probably don’t matter, but I missed the boat perhaps on all the things that a title represents. An identity, recognition of years of education and hard work, and of course, most companies connect titles to access to important information and compensation. Saying that titles don’t matter, especially from a senior-level position, is kind of like Bill Gates saying money doesn’t matter. He’s right – money doesn’t matter if you already have it and all that comes with it! The reality is, we as HR Pros (now there’s a title for you) waste a whole lot of organizational time dealing with titles – from negotiating them during the offer process to an employee who is unhappy with their current title. So what do we do?

Oh, and if you’re having a hard time coming up with a good title for yourself, visit bsjobs and have you pick!