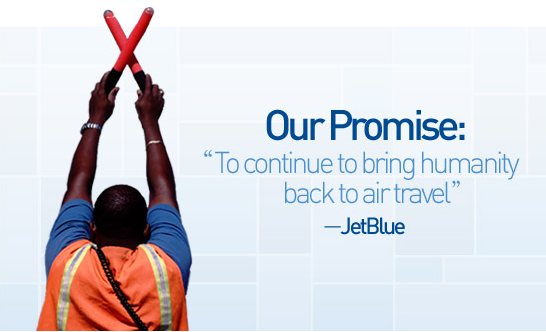 Unless you live in a remote corner of Yosemite National Park and spend your days oggling double rainbows, you probably heard a newsy little tidbit about a fedup JetBlue employee and his beer swilling, f bomb dropping, emergency chute pulling, and in-all-ways dramatic exit from a JetBlue aircraft.

After an encounter that he describes as the straw that broke the camel’s back, Steven Slater gave his own special rendition of the Johnny Paycheck classic.  And while the facts in question are in dispute, right or wrong, Steven Slater became something of a folk hero in the eyes of every disgruntled flight attendant, barkeep and shop girl in the country.

JetBlue, for their part, have remained understandably tight-lipped with the exception of a blog post that more or less outlines the lack of commentary from their side:

While we can’t discuss the details of what is an ongoing investigation, plenty of others have already formed opinions on the matter. Like, the entire Internet.

Damned if you do and damned if you don’t?  Social media has opened up new avenues for business.  Sites like LivingSocial and Groupon bring thousands of would be customers to small businesses.  Mom and pop operations find new markets at a fraction of the cost and many times the speed of the way advertising used to be done.

On the flip side, most businesses, small and large, are by now accustomed to the occasional troll or disgruntled customer airing dirty laundry in a public forum or social media site.  Sure, there was a period of rough adjustment for a lot of social media reviewers and businesses.  But most consumers of Internet reviews now know to take the very good and very bad with a grain of salt.  Even some site mediators eventually began to catch on – allowing business owners to respond publicly.

What then do we make of the Internet’s latest folk heroes: the disgruntled service employees of the world?  It seems clear that the customer is not always right.  Take for instance the wildly popular videos created by some former BestBuy sales associates who tired of dealing with aggressive and inane questions posed by customers (WARNING!  Lots of profanity. Not safe for work, perhaps. Email subscribers, click through to watch):

BestBuy’s response was to fire the budding director only to later offer him his job back.  Clearly, employers don’t know what to make of the speed with which a disgruntled employee can find so much sympathy on the Web – baseless or no.

So, as Yosemite Bear would say, “What’s it all mean?”

Things have only yet begun, friends. And you can thank me later when you realize you know how to handle the next disgruntled employee because you’ve thought about the answers to these questions.