I think I may be staking my claim as the FOT politics writer with this post.  Obviously, I can’t get enough.  I’m unable to keep up with KD, Sackett and Boese when it comes to the NBA (Oklahoma City can stuff it).  But, I can try to make up for it by staying with the events leading up to the Tuesday after the first Monday in November of even numbered years.

I have come to the conclusion that the United States electorate is not made up of a bunch of recruiters or hiring managers.  Of course, we’re out there.  But, we must be the ones voting for third party candidates. 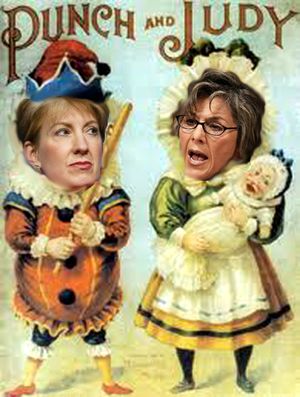 Why do I say this?  Well, if you’ve been watching any of the debates, you would know.  And, I’m talking any of the debates.  From my home state of Washington, to Delaware, to California.  No matter where they are debating, there is one thing that all of the debates have in common.  Rather than talking about what they would do or have done – like we expect of candidates – these candidates for public office prefer to talk about why you shouldn’t hire the other person.

Can you imagine if you had the same experience with a candidate?

Let’s say you’re trying to find the right person for a job.  You’ve gone through a several month long process to whittle the candidate pool down to two people, each with their own strengths and weaknesses.  Finally, you put them through one final interview.  Actually, one candidate wanted 6 interviews.  But, the other (often the internal candidate) insisted on no more than 2… or none if you’re interviewing in San Francisco.  Since when did the candidate determine how many interviews they had to go through, anyway?

Moving on.  You get to the interview and you ask a question like this: “How would you deal with a tough deadline and a limited budget?”

Candidate: “Well, my opponent would totally screw it up.  First, he’ll spend all the money on extra staples for people that should be ordering their own staples.  And then, he would waste most of the time schmoozing with the clients.  Oh, and he hates the troops.”

When interviewing, it always looks bad to pass the buck.  Think about it.  How many times have you written “blames others” or “isn’t accountable” in your notes?  Even if it’s legitimately someone else’s fault, pointing the finger at someone else in an interview is like hitting on your girlfriend’s mom.  You just don’t do it.  Unless you’re running for Congress.  Then, you can do it all you want.

Or, let’s take this example:  “This will be a management position.  How do you go about finding talent and improving your team?”

Candidate: “Well, that’s an easy one.  That other chump you’re interviewing would start by posting an ad in the paper like this was 1985.  And, he’s a Socialist.”

Recruiter: “Wait, no… that didn’t answer the question.  The question was… how would YOU go about finding talent?”

Candidate: “Certainly not by cutting salaries, like my opponent would do!  Duh! Be a MAN!”

Ah, politics.  Imagine if we ran our companies this way.  Imagine if we hired based on the scare tactics and the exaggerated, sometimes false, information being given to us by the other person wanting the job.  I bet our companies would end up bloated, in debt, and poorly managed while our shareholders sat there, helpless, getting more and more ticked off at the way things were being run.

Wait a second… that sounds familiar.

I think we need to make Wolf Blitzer, and anyone else moderating a debate, sit through an interview training course.  Either that, or we hire John McEnroe.